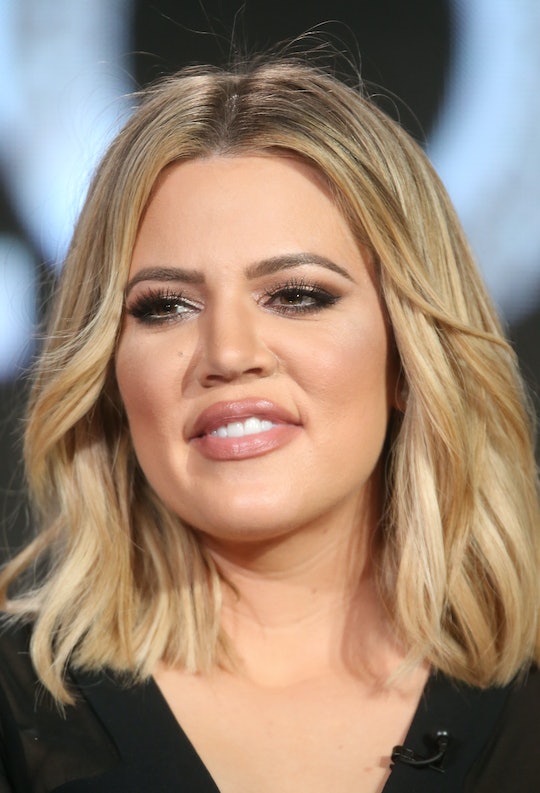 On Thursday, Khloé Kardashian gave birth to a baby girl. Three days later, on Sunday, she announced that she had named her daughter True Thompson. Khloé received even more public attention at the end of her pregnancy than Kardashian life events typically elicit (save for, perhaps, Kim's televised wedding special), but not for the best reason. The Daily Mail released a video that claims to show Tristan Thompson, Khloé's partner and the father of her child, cheating on her while she was waiting in Cleveland to give birth to his daughter. The whole thing has been slowly playing out over the days since the baby's birth, and many people have commented on the irony of the child's name choice. However, there's another element that's raising questions: why Khloé Kardashian reportedly decided to give her daughter Tristan's last name. (Neither Kardashian's nor Thompson's reps have responded to Romper's request for comment.)

People reported that a "source" (which should always be taken with a grain of salt until confirmed) said Khloé decided to give True her father's last name because she still very much loves Tristan, and recognizes that their daughter is, well, theirs, and that despite everything they are going through, the validity of his role as her father isn't diminished in the slightest.

Though this doesn't quite confirm or deny whether the two are still together, it had been previously reported by People that Tristan and Khloé are "taking it day by day," and not yet ready to call it quits.

Prior to laws that were passed in the 1970s, babies were required to take their father's last names. However, that is no longer the case. The New York Times reported that the laws gave families "more flexibility," especially mixed families, LGBT families, or just parents who split prior to a child being born. Despite it not being law, many parents do opt to give their children their father's last name either as a matter of personal preference, a sense of familial unity, or just tradition.

Regardless of Khloé's rationale for giving her daughter the last name Thompson, people have had a strong reaction to her choice of first name too. Many people on social media have said that "True" is an "ironic" choice given that her boyfriend was, uh, allegedly not all that true to her. In fact, many people even felt the choice was a dig at Tristan, though Kris Jenner later cleared up speculation on where the name came from.

Kris took to her own Twitter account on Monday to share how excited she was for her daughter, and how special the name True is to their family. She explained that her grandfather's name was True Otis Houghton, and her father's name was Robert True Houghton. She hashtagged the post "#familytradition," shedding light on where Khloé may have gotten the idea.

Though it's still unclear where Tristan and Khloé stand as a couple, recent reports have said that despite their "unified front," they are actually not doing well. TMZ reported on Tuesday that Khloé hadn't spoken to Tristan in days, though they've confirmed that Khloé is rumored to be staying at his house, mostly out of convenience for now. The Mercury News also reported that Khloé is looking to leave Cleveland "as soon as possible." For the time being, Khloé's sisters and her mom have all flown out to be with her, E! reported. The TMZ story also noted that Khloé and Tristan hadn't been alone since the baby was released from the hospital, which would be plausible if her whole family were there.

Though the name choice might seem like a hint as to whether Khloé sees a future with Tristan, it's just as much of a mystery as it ever was. Right now, they're focusing on what really matters — their new daughter — and likely figuring out the details of their relationship on their own terms.