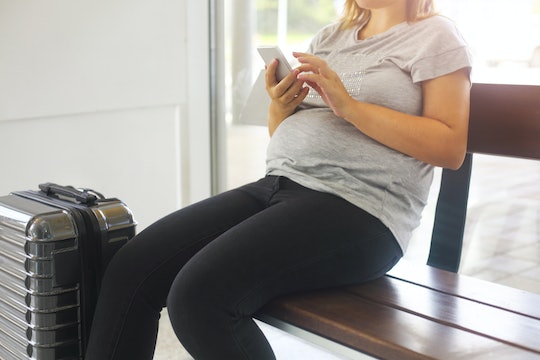 Here's Why Russian Moms Are Coming To The U.S. To Give Birth

When preparing to give birth, many parents look for a place to deliver within close proximity to their home to help things go a little smoother on the big day. However, that's increasingly not the case for women from Moscow, Russia, who sometimes travel halfway across the world to have their babies. As reported by NBC News, Russian women traveling to Miami to give birth has been on the rise — and for very curious reasons.

The outlet explains that for women from Moscow, it's a "status symbol" to have a baby with American citizenship. Plus, once the child turns 21 years old, their parents will have a greater chance of becoming American citizens, because the child will be able to sponsor their applications for American green cards.

The price of the trip can be as expensive as $100,000. NBC spoke with dozens of women who have participated in "birth tourism" to find out exactly why they chose to shell out so much money and leave home for months at a time to participate. Women told the outlet that they do it for the American passport, the educated doctors, and not to mention, the weather.

Due to the rise of birth tourism, the city of Sunny Isles Beach (which neighbors Miami) has had a bit of a Russian Renaissance. "Sunny Isles beach has a nickname — Little Russia — because people who are moving from Russian-speaking countries to America, they want … a familiar environment," Roman Bokeria, the state director of the Florida Association of Realtors, told NBC News. "They go across the street, they have Russian market, Russian doctor, Russian lawyer ... It's very comfortable for them."

And "birth tourism" is becoming so popular that there are agencies Russians can hire to help them with the process. NBC profiled a firm called Miami Mama, which claims to bring around 100 clients to the United States each year. Irina and Konstantin Lubnevskiy purchased Miami Mama after having two children of their own through the agency.

"I would like the American people to understand they don't have to worry," Konstantin told NBC News. "Those who come here want to become part of the American people." He also said that he and Irina encourage their clients to be completely honest and transparent when dealing with immigration officers. "We tell every client, 'You have the documents, you have to tell the truth,'" he said.

Matters of immigration and citizenship have been a hot-button issue in the United States as of late, especially since Donald Trump became president. So understandably, the news of Russian birth tourism has caused a stir on the internet. In a tweet that has since gone viral, a user who goes by wolfnae wrote, "I guess immigration is only wrong when the immigrants are black and brown."

Her tweet is pretty spot-on, considering that Trump has made it clear that he does not support undocumented immigrants or their children living in America. In September, he announced that he would be ending Deferred Action for Childhood Arrivals (DACA), an Obama-era policy that protected immigrants who were illegally brought to the United States as children from being deported. And during the first week of his presidency, Trump signed the travel ban executive order, temporarily barring refugees from several Muslim-majority countries from entering the United States. Furthermore, Trump has said that he is against American citizens having the right to sponsor relatives, due to terror attacks, according to NBC News. He has also stated his intent to end birthright citizenship, calling it the "biggest magnet for illegal immigration."

Basically, Wolfnae's tweet suggests that Trump and other higher powers in this country are only against immigration when the people involved are not white, and there's a lot of evidence supporting that so far.

Plus, many Russian birth tourists choose to live in Trump buildings when they move to Sunny Isles Beach, the Daily Beast reported. One popular Instagram influencer who had her baby in the Miami area appears to be a fan of the Trump Royale in Miami.

Hm. This really doesn't do anything to help the whole Trump-Russia collusion controversy.

More Like This
Nebraska Judge Rules Two Mothers Cannot Appear On Their Sons' Birth Certificates
The FDA Is Worried People Are Cooking Chicken In NyQuil
Quinta Brunson Got A Sweet Card From A Kid On Abbott Elementary After Her Emmy Win
Lifelong Teacher Dr. Jill Biden Loves Watching Abbott Elementary Too