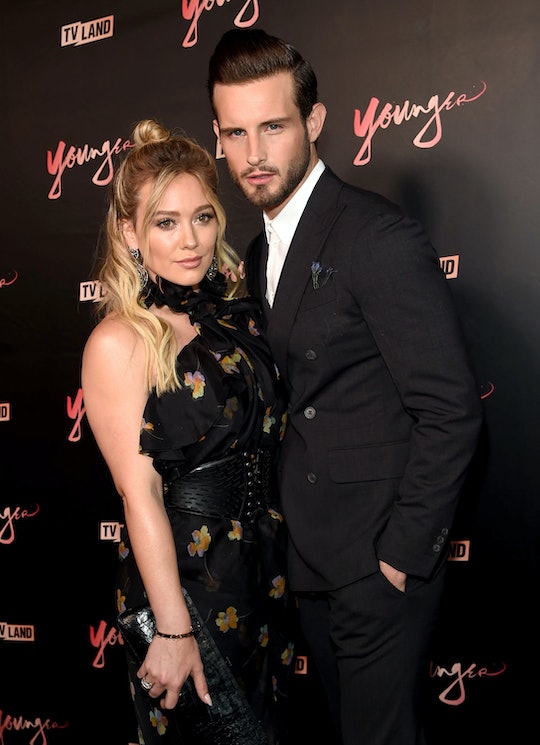 Hilary Duff's Breast Milk Is 'Delicious' According To Co-Star... Who Knew?

Moms who have breastfed their babies for any length of time have probably wondered at some point: "Hmm. What does my milk taste like, anyway?" Although plenty of women have tried their own breastmilk and reported on what they think it tastes like — I know I have — to me it seems a little, um, different for other grown adults to go around drinking someone else's milk. But to each their own, I suppose: Apparently, Hilary Duff's breast milk is "delicious" according to-star Nico Tortorella. Who knew?

Duff and Tortorella — who both star on the hit series, Younger — sat down for a table read of the sixth season of their show on Friday, Feb. 15, according to People. Because she's a working mom who breastfeeds her 3-month-old daughter, Banks, Duff had naturally brought her breast pump to the event. Through some unknown series of events, Duff was able to convince Tortorella to taste some of her expressed milk — and then the pair shared his response on social media.

As E! Online reported, Tortorella posted a video of himself taking a drink of Duff's breast milk. "I'm for real doing this right now," he says in the Instagram Story clip, according to the publication. "Mmm," he says after apparently trying it. "Oh my God, it is delicious!"

Later on, Duff shared a screenshot of Tortorella's video on her own Instagram Story, writing, "Actually he did that. Banks gonna be pissed."

In case you're wondering if Duff's breast milk could really be as good as Tortorella says, people who have tried breast milk have said it tastes like anything from extra-sweet cow's milk, to melted ice cream, cantaloupe, and lightly-sweetened water. Based on her co-star's feedback — along with a recent photo Duff shared of her baby girl — I would be willing to be hers is closer to the ice cream category. (For the record, mine definitely did not taste like melted ice cream; it was actually closer to sweetened water.)

Duff welcomed her second child with boyfriend Matthew Koma (and his first) in October, Us Weekly reported. "Banks Violet Bair❤️ this little bit has fully stolen our hearts!" she captioned a photo of herself, Koma, and their precious newborn. "She joined our world at home on Thursday afternoon and is absolute magic ✨."

Since then, Duff has shared several breastfeeding moments with her Instagram followers. Like this one of her feeding baby Banks while also feeding herself.

Or this hilarious take on Rachel McAdams' glamorous pumping photo that made the cover of Girls, Girls, Girls magazine. "Am I doing this right?😛" she captioned an Instagram post consisting of McAdams' photo above a snap of herself (comically) re-creating her pumping vibe.

But yeah. Thanks to the power of social media, it looks as if Hilary Duff — in addition to being a talented singer, actress, and kick-butt working, breastfeeding mom — can add another accolade to her resume: "Delicious breastmilk." (Just don't tell baby Banks!)

More Like This
Can You Burp A Baby Too Hard? A Pediatrician Shares Tips For Gassy Tummies
When It’s Safe To Bring Your Newborn To A Restaurant, According To A Pediatrician
Can You Give A Sleeping Baby A Breathing Treatment? Experts Explain
Celebrate Baby's First Christmas With These 40 Instagram Captions