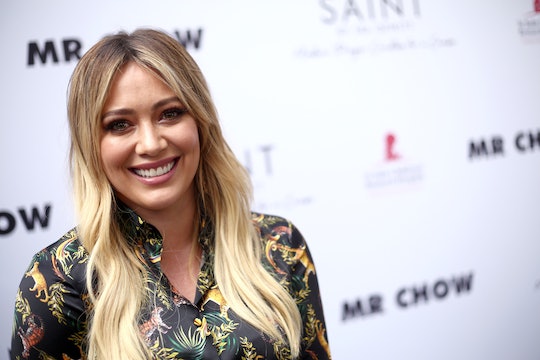 Hilary Duff's Mom Guilt Over Having Baby No. 2 Is Too Real

There is a reason why Hilary Duff's mom guilt over having baby number two is too relatable — it perfectly sums up the fears that moms have when bringing another child into the world.

Duff and her husband, Matthew Koma, welcomed their second child into the world together in October 2018 — a little girl named Banks. But this was an adjustment for Duff's 7-year-old son, Luca (she shares him with ex-husband, Mike Comrie). Duff opened up about this transitional period in a new interview with PureWow, explaining that she felt guilty for getting pregnant because she and her son had been parters-in-crime for so long.

"The guilt that I felt for bringing her into the world was so big," she said. "It was just he and I for so long that he was like, 'Why? Why mom? Why would you do this? I really just love the way it is.' And it wasn't bratty, it was just so sad."

On top of Duff's super strong pregnancy hormones, this was almost too much for her to handle. "I was like, 'How do I reverse this?! It's too late now,'" Duff told PureWow.

"It's such big feelings. When you're pregnant, everything just feels magnified."

But things were quick to turn around, especially once Banks was born.

Duff's wonderful Instagram feed is filled with photos of Luca caring for his little sister. And although he might have been reluctant to share his mom with a newborn baby, Duff has been vocal about how her son is an excellent big brother.

In December 2018 — just two months after she gave birth — Duff told Entertainment Tonight that Luca was so being attentive to his newborn sister. "He's so loving towards her and is always, like, holding her face and wants to hold her," she said. "When she starts to cry, he's like, 'Mom, she's gonna blow! Get her!' It's really sweet. It's like she's always been there and he's just cool."

But, this past November, Duff told People that Luca's watchful eye has gotten to be a little too much to handle. "I'm like, 'She's gonna fall down. She's got to learn not to go near that' or whatever," she shared. "I sat him down once and said, 'Hey, you survived and I was your mom, so I swear she's going to be OK.'"

Although Duff might have felt guilty about Luca's reaction at first, a lot has changed since then — he cannot get enough of his little sister. Duff, on the other hand, seems to have gotten rid of the guilt. She makes being a mom of two look like so much fun.