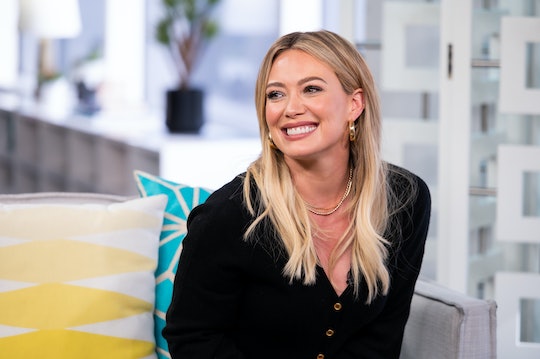 Oh, toddlers. One minute, they love carrots — and the next, they're throwing the mushy orange vegetable against the wall in an epic tantrum. The thing is, it's completely normal; their tastes and preferences are constantly changing. Still, it can be frustrating for caregivers to navigate. Which is why Hilary Duff's picky-eating post is so darn relatable.

On Thursday, Jan. 23, the Lizzie McGuire star took to her Instagram Story to share about a common struggle parents of toddlers face. Because it seems that her daughter Banks — whom she shares with husband Matthew Koma, and who turned 1 in October — is a bit of picky eater. Duff shared a photo of what looks like some homemade granola bars, writing: "Made these healthy/amazing treats for Banks ... she's a very picky eater right now and LOVES them. One problem ... so do I!"

Although the mom of two seems to have figured out how to get her 15-month-old to willingly eat a nutritious snack, the toddler didn't seem too keen about another of Duff's healthy-eating strategies. It turns out, the actress attempted to hide veggies in Banks' meal — except the toddler ended up outsmarting her sneaky mama.

"She didn't realize there were mashed veggies inside ... such a dirty mom trick," Duff captioned a video of Banks catching onto her trick by leaving the vegetables uneaten on her high chair tray.

Another clip shows Banks continuing to chow down on the non-veggie portion of her meal. "She ate just the noodle covering," Duff revealed. Touché, Banks.

The struggle is real when it comes to dealing with picky toddlers. Pediatricians often advise parents of picky eaters to keep offering a variety of healthy foods to their little ones — even if they refuse it time and time again. "Just because a child refuses a food once, don't give up," the American Academy of Pediatrics (AAP) urges. "Keep offering new foods and those your child didn't like before. It can take as many as 10 or more times tasting a food before a toddler’s taste buds accept it."

Other tips from the AAP include involving kids in meal planning and meal prep, arranging food in "fun, colorful shapes," offering finger foods that can be dipped, avoiding bribing kids to eat undesired foods, and not making a huge deal if they refuse to eat certain food.

As a mom of four who had one particularly picky toddler, I totally feel for Duff right now. Because I, too, have attempted sneaking vegetables into her diet. Sometimes the offending veggies went unnoticed. But more often than not, my picky eater would catch on and refuse to eat the meal served to her. It can be so frustrating.

The good news is, as toddlers grow, they tend to "grow out" of their pickiness. Or at least, that was the case with my daughter, who would eat precisely zero vegetables at age 2. These days, she'll eat at least three different kinds of veggies — which isn't spectacular. (But hey, I'll take it.) Hang in there, Hilary!