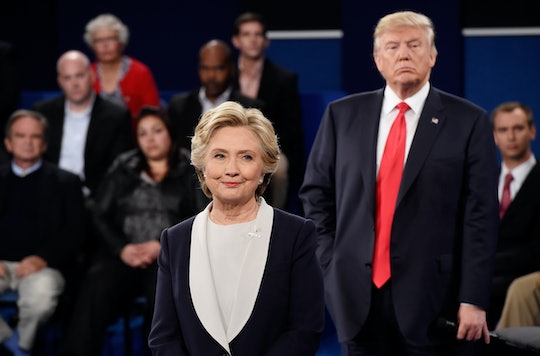 Unfortunately, the 2016 presidential election made it very clear that sexism is alive and well in the United States. Even before President Donald Trump moved into the White House, the rhetoric surrounding each campaign event and debate was horrible. And now, over a year later, Hillary Clinton has revealed why she didn't call out Trump for being a "creep" — as she put it — during that infamous second debate, and the internet's response further proves her point that sexism is stifling.

In case you might have forgotten (or just, ya know, have been actively blocking it from your memory), a lot happened during the presidential debate of Oct. 9, 2016. Many things happened that night, including the first time Trump and Clinton didn't shake hands at the start of the debate. After that, the hits just came coming as Trump shrugged off his "grab them by the p*ssy" comment as "locker room talk," and continuously lurked behind Clinton as she walked around the stage answering questions. In fact, Trump standing so close behind Clinton ended up becoming one of the most memorable parts of the debate, and made way for numerous headlines and trending moments on Twitter.

And now, speaking at the Teen Vogue Summit on Saturday, Clinton has revealed her reasoning for not speaking up while Trump was following her around, and it basically reveals how engrained sexism has become in society.

I thought about that, and what would have happened if I spun around and said, "You love to intimidate women, but back up, you creep!" I think it would have been really satisfying. But I also think given the way women are covered..they would have said, "She can’t take it," or, "We don’t want an angry woman in the Oval Office."

And, honestly, she's right. The media coverage of Clinton during the 2016 was unashamedly sexist. In fact, the 2016 Blair Center Poll, which is administered directly after the election, found definitively that sexism did play a role in the 2016 election. According to Slate's coverage of the poll, a "total of 36.2 percent of the entire sample — male, female, Democrat, Republican, black, white, Latino — answered in such a way as to be classified as 'sexist.'"

So, yes, Clinton's latest remarks actually make a lot of sense. And what's more, the internet's reaction to her explanation are unsurprisingly sexist as well.

Truly, Clinton is correct in her mindset that women are judged more harshly for men. People still blame Clinton for the actions of her husband years ago, despite Trump being accused of sexual assault by 20 women, according to The Guardian. And at the summit, as Glamour reported, Clinton also explained in order for change to happen, women need to be allowed to fully express themselves:

We have to make it not only safe for women, we have to make it possible for us to express a full range of human emotion…without being so negatively judged. Remember when he called me a nasty woman? All of that stuff he did didn’t end up hurting him that much because men are given a much broader range of emotions to demonstrate their authentic feelings.

While it may be 2017, women are still held to a higher and much different standard than men, for whatever reason. But it's hard to ignore the fact that, during that infamous debate, Trump was acting inappropriately by following Clinton around. As The Washington Post put it, his body language "reinforced his perception as a schoolyard bully." But if Clinton had said anything about it, she would have been harshly judged. So, let all young women everywhere take note of Clinton's remarks. And if someone is attempting to intimidate you or make you feel uncomfortable, don't have any regrets. Just tell them:

Back up, you creep!