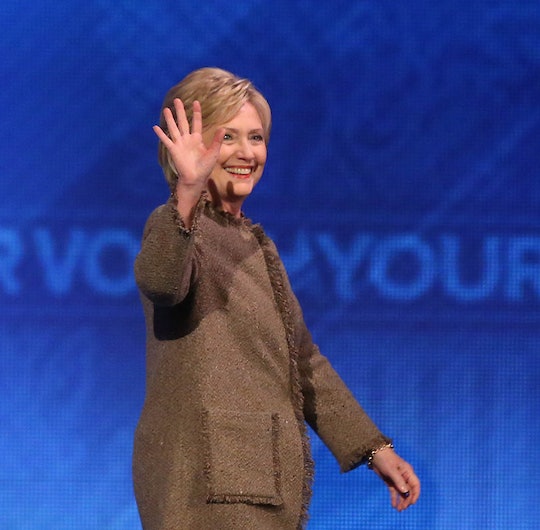 As Saturday's ABC Democratic Debate came to a close, Hillary Clinton's closing statement was powerful, to the point, and anything but apologetic. The former Secretary of State made a point to touch on important topics like reproductive rights, voter's rights, and the potential problems that could arise from electing a Republican President.

On January 20, 2017 the next President of the United States will walk into the White House. If heaven forbid, that next President is a Republican, I think it's pretty clear, we know what will happen. A lot of the rights that have been won over years, from women's rights to voter rights to gay rights to worker rights, will be at risk. Social security, which Republicans call a "Ponzi Scheme" may face privitization. Our vets may see the VA hospital, that needs to be improved and made better for them, turned over to privatization. Planned Parenthood will be defunded. The list goes on because the differences are so stark.

You know, everybody says every election is important and there's truth to that; this is a watershed election. I now how important it is that we have a Democrat succeed President Obama in the White House, and I will do all that I can in this campaign to reach out and explain what I stand for and what I will do as President.

You know I became a grandmother 15 months ago so I spent a lot of time thinking about my granddaughter's future, but as President I will spend even more time thinking about the futures of all the kids and the grandchildren in this country, because I want to make sure every single child has a chance to live up to his or her god-given potential. If you will join me in this campaign we will make that a mission. Thank you, goodnight, and may the force be with you.

Clinton's closing statement tied a beautiful bow on what many would consider a successful debate. The always-watchful Twitter had predominantly positive reactions to the candidate's performance, highlighting her answers to topics concerning ISIS, Donald Trump's recent anti-Islamic statements and her plans for a more inclusive United States of America.

And if the sweet sentiments weren't enough, the Star Wars reference put her over the edge.

According to CNN/ORC polls, the majority of past viewers named Hillary the overall winner in this year's earlier debate, regardless of a lack of increase in her standing for a potential party nomination. More than 6-in-10 Democrats said Hillary did the best job of any potential candidate, almost double her closest opponent, Bernie Sanders.

During the past debate, Hillary wasn't one to shy away from the tough issues. Clinton touched on the then-recent terrorist attack on Paris, laying out a plan to increase national security by coordinating efforts with U.S. allies. Saturday night's performance solidified Hillary Clinton's overwhelming lead in the Democratic election, making a future nomination all the more expected.