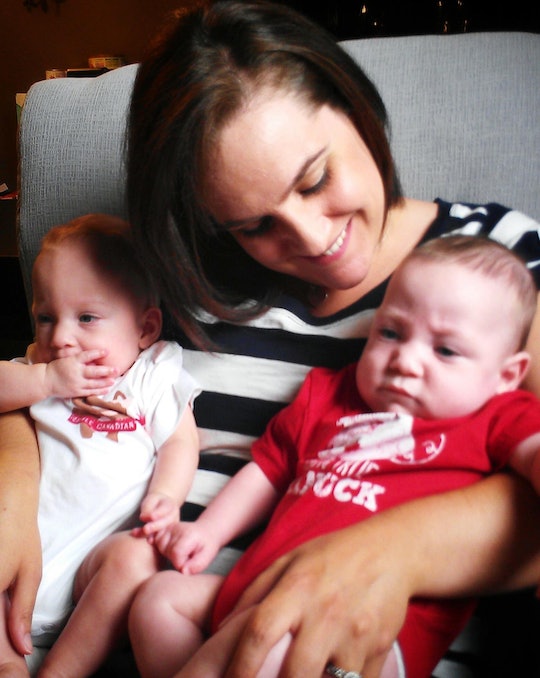 Honestly, Getting Pregnant When You’ve Had Vaginismus Is Scary

I became a mother when I was 26, but for more than a decade before that, I suffered from a chronic pain condition called vulvodynia that left me wondering if it would ever even be possible to have kids one day. Having vulvodynia meant, pretty simply, that my vagina hurt for no good reason, but at it's worst, it turned into a more specific condition called vaginismus, which made things like sex, pap smears, and tampon use literally impossible. I was lucky enough to finally become pain-free not long before getting pregnant, but honestly, getting pregnant when you've had vaginismus is absolutely scary.

Even when you don't desire to have children, having vulvodynia or vaginismus is totally brutal. The obvious reason why is because it's physically painful — for me, vulvodynia presented as an intense burning pain that would linger without any options for relief — but there are many other reasons, too. Female pelvic pain isn't always well understood by doctors, and certainly isn't something that is commonly discussed in general, so lots of women (myself included) spend years not even knowing what's wrong with them, and when they finally do ask for help, they end up getting their pain dismissed, or misdiagnosed as a yeast infection or a UTI, or some other kind of gynecological issue.

In a relationship? Vaginismus will try and screw that up as well. Even in the most committed of partnerships, the fact that you can't have sex without pain will inevitably cause problems. My now-husband, Matt, was incredibly patient and supportive, but we still fought about it, each of us struggling with feelings of rejection and sadness and hurt feelings that likely won't ever completely fade from our respective memories. And if you're not in a relationship, having vaginismus can put you off of dating entirely — I mean, "it hurts me to have sex and I don't know why" isn't exactly the kind of thing you want to bring up to someone you're otherwise totally interested in.

I'd always assumed that when sex finally became something Matt and I could have without any pain or anxiety (after so many years of lots of pain and lots of anxiety), we'd be totally down to make up for lost time, catching up on all the sex we hadn't had during the exciting early days of our relationship, or on our honeymoon, or really any other time we'd been together. Instead, uh, I got pregnant with twins, almost right away. And just like that, we stopped having sex again — not because it hurt, but because I was so unbelievably sick and exhausted, and ended up having a really complicated, miserable pregnancy.

I'd felt let down so many times by my own body, trying to will it into having sex without pain out of sheer desperation. Far too many times I'd gone ahead and had sex anyway, enduring the pain, resigning myself to the idea that maybe this was always how it was going to be and I'd just have to learn how to take it. And now, my body was letting me down again, totally failing at pregnancy, struggling with every minute.

Outwardly, Matt and I seemed like we were on the same page: it was abundantly clear that I was really having an awful time being pregnant, and sex didn't sound that appealing to either one of us (I guess a pregnant woman who is constantly puking or lying wiped out on the couch totally miserable wasn't exactly a turn-on for either of us). But inside, I was nervous. We'd only just begun having sex like normal human beings, and it had only just started to get good. What if we'd gone and ruined everything by getting pregnant — if the vaginismus would somehow come back as quickly as it left? And even worse, didn't people always say that sex after childbirth was painful? If people who had never experienced vulvodynia before found postpartum sex hard, then how much of a nightmare was it going to be for us?

Then, of course was the issue of actually giving birth. Like many mothers, I really wanted to avoid a c-section if I could, and yet, the thought of pushing two babies out of my vagina was absolutely horrifying. I mean, most first-time moms-to-be find the notion of childbirth and delivery nerve-wracking, but my vagina and I had never been friends. I'd felt let down so many times by my own body, trying to will it into having sex without pain out of sheer desperation. Far too many times I'd gone ahead and had sex anyway, enduring the pain, resigning myself to the idea that maybe this was always how it was going to be and I'd just have to learn how to take it. And now, my body was letting me down again, totally failing at pregnancy, struggling with every minute. How was I going to survive the already-painful experience of delivery with a faulty vagina?

Prior to my twins' arrival, I'd read about different options like perineal massage, or hypnosis. I spoke to my therapist about my concerns, too, and that helped ease some of my anxiety. But when I ultimately did give birth, my vagina was pretty much the very last thing on my mind. I wish I could say it was because I realized I'd had nothing to worry about, and everything was happy and fine, but really it was because I went into labor prematurely at 25 weeks gestation and was too terrified to even notice whether or not my vulvodynia had come back or not.

Matt and I both still struggle sometimes with the fallout of years of the anxiety, sadness, and stress that vulvodynia causes, and sometimes, when we do have sex, I can still sense that Matt isn't entirely confident he won't end up inadvertently hurting me.

The fact that almost everything about my pregnancy and delivery was a total nightmare made it that much more surprising and incredible though that, when Matt and I finally did get around to having sex again after the twins' birth, it wasn't just not painful, it was the best sex we'd ever had. I don't know why exactly — whether something about giving birth made it easier, or whether going through the experience of having such premature twins made us closer and thus, better able to connect with one another physically. Maybe it was both of those things, or perhaps it was something else entirely. But those preemie twins are going to be 4 years old this year, and we're still having great, pain-free sex. And I don't take that for granted for a second.

I can't say though that there isn't a part of me that worries vulvodynia could still come back again at some point, like maybe it's just waiting to ruin us again as soon as we've let our guard down fully. Matt and I both still struggle sometimes with the fallout of years of the anxiety, sadness, and stress that vulvodynia causes, and sometimes, when we do have sex, I can still sense that Matt isn't entirely confident he won't end up inadvertently hurting me. Even if the physical pain goes away, the emotional pain caused by vulvodynia stays with you forever.

But I'm grateful to be pain-free, and I'm grateful that I was able to get pregnant without pain or outside intervention. When you struggle with something like vulvodynia though, the things many people take for granted as easy and natural (having sex, getting pregnant, etc.), can become a huge struggle. And the prospect of facing them directly can be pretty terrifying.