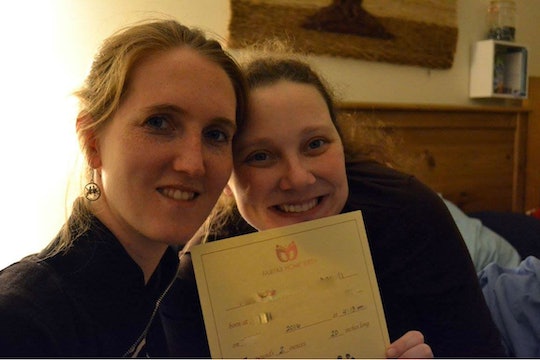 Honestly, I Am So Thankful For My Midwife

I am practically evangelical in my love of midwives. There are so many studies that show that for healthy, uncomplicated births, they help prevent unnecessary complications (such as cesarean deliveries). I've had certified nurse midwives provide my prenatal care and attend all three of my births, and I wouldn't want it any other way. But in particular, for my third birth, I was so thankful for my midwife. My water broke unexpectedly two-and-half weeks before I was due. In the grand scheme of complications, this one is pretty minor, but it took me by surprise and could have derailed my planned home birth. And honestly, if it wasn't for the thoughtfulness and kindness of my midwife, I'm not sure I would have come through it with such ease. (Yes, I'm really using the word "ease" in regards to birth.)

I consider myself to be a birth junkie. I can't get enough of hearing about birth, or talking about it, or reading about it. Every birth is amazing and miraculous and different. I have doula and midwife friends who know I am always up for hearing a birth story. And having heard about so many variations on the process, you'd think I'd be prepared for everything. Intellectually, I know that you should be prepared for the unexpected, but I was confident, after having two births under my belt, that nothing could surprise me.

The night my water broke, my 3-year-old daughter came into my room crying. She wasn't even fully awake and she was having a tantrum, which normally meant that she had to pee. So I jumped out of bed to help her, and I felt a gush. I looked at my partner and told him my water might have broken, but I thought maybe it was pee. So I rushed to the toilet and peed, hoping that that was all it was, while my daughter was still wailing. She ended up having an accident because I was monopolizing the toilet, and when I stood to help her take off her wet pajamas, I had another gush. I'll never forget that moment. My daughter and I were both standing in puddles and I knew without a doubt that my water had indeed broken.

In my first labor, my water broke when I was around 7 centimeters dilated, which is pretty "standard" (if such things could be standard). In my second labor, my water never broke. My amniotic sac was still intact as my daughter was born. And that was pretty amazing. Birthing a water balloon is more comfortable than birthing a baby without anything cushioning their poky little joints. Until that third birth, I hadn't had that experience that is so often depicted in movies, where you gasp and look at the puddle at your feet and declare that your water had broken.

But the bigger surprise was that it happened earlier than I thought it would. I had just passed the 37-week mark. I had only just gotten all my birth supplies gathered and written my birth plan. I only bought a new car seat the day before. My first baby was born a few days after his due date and my second was born a week before. In a lot of ways, I just didn't feel ready. I hadn't totally mentally prepared. I hadn't even really considered the fact that my third baby's birth might be so soon. The night my water broke, my husband had joked that the baby was going to come soon, because I was in a nesting frenzy. I had all my birth supplies gathered and laid out on my dresser; and I had bought a million snacks for myself and my birth team that were carefully arranged on a table in our kitchen. But I was in denial. I was convinced I'd know when I was ready to have him, as I had with my daughter. With her, I knew, intuitively, I wasn't ready, until one day, I just felt ready — then she was born two days later.

She suggested I try to sleep, to get rest before the marathon of real labor started. She encouraged me to trust in my body. And in that moment, I needed that reminder.

I called my midwife to tell her my water had broken. I was sort of freaking out. My heart was pounding and my voice was shaking. I just couldn't really believe this was how this birth was going to go. When your water breaks, it sort of starts a ticking clock. The rate of uterine infection goes up drastically once your water has been broken for 24 hours, according to the study "Intrapartum Care: Care of Healthy Women and Their Babies During Childbirth" published in the National Collaborating Centre for Women's and Children's Health (UK) journal, so many caregivers really want to make sure the baby is delivered by then. Even if that means a medical induction. Even if that means a cesarean.

I immediately began thinking of ways to get labor started, because even though my water had broken, I wasn't feeling anything more than infrequent contractions. (And with each of those contractions, I got a new warm gush of fluid, so there was no doubt in my mind what was going on.) My midwife was so wonderfully calm. I asked her if I should try to get my 3 year old to breastfeed, since nipple stimulation can intensify contractions. I was ready to do everything to get things going. But she suggested I try to sleep, to get rest before the marathon of real labor started. She encouraged me to trust in my body. And in that moment, I needed that reminder.

The next morning, labor still hadn't started. I hadn't slept that well, because I was excited, anxious, and leaking fluid every so often. We told the two older kids that they could stay home from school because their baby brother was probably going to be born that day. But I just kept waiting. I napped when I could. I walked around the field behind my house when I felt up to it. I knew we were going to have to get things going.

My midwife, in a calm and loving voice, knowing that I was getting anxious and knowing that, for me, there's nothing worse, told me that she wasn't concerned. She wouldn't "make" me go to the hospital. There were lots of things we could try. She was sympathetic to how I was feeling.

I was having pretty strong contractions, but I knew it wasn't "real" labor yet. Nothing felt that serious. By evening, I was despairing. We were inching closer and closer to that 24-hour mark. I really didn't want to take castor oil to try to get things moving. (No pun intended, but this is how castor oil works: it causes diarrhea and intestinal contractions to which the uterus is sort of sympathetic, so it joins in on the contracting.) I couldn't imagine having to go to the hospital. I'd kept my kids home from school for nothing. My 6 year old had complained when I tucked him in that night that he was impatient. "No one's more impatient than I am," I told him.

I started feeling a sick sort of dread. I'm afraid of hospitals. I hated the idea of getting into the car and driving somewhere. I was nervous that the sickness I was feeling was panic instead of labor hormones (and likely it was), and I had two zen, calm births under my belt. Labor, for me, had always been a calm and reverent and joyful time, so I hated the idea that this birth would be colored by anxiety.

But my midwife, in a calm and loving voice, knowing that I was getting anxious and knowing that, for me, there's nothing worse, told me that she wasn't concerned. She wouldn't "make" me go to the hospital. There were lots of things we could try. She was sympathetic to how I was feeling. She suggested I maybe call my chiropractor who would make house calls during labor. And if we reached the 24-hour mark and nothing was happening, we could try castor oil or even Cervadil, which is a cervix-ripening medication that is generally the first part of a hospital induction. She put me at ease, and I found myself able to relax more than I had been able in hours.

I think that's what finally got my labor started. My kids were tucked into bed. It was dark and quiet. I was calm. Labor naturally stalls when the body is flooded with adrenaline, because the same receptors in the brain that respond to adrenaline also respond to oxytocin, which is the hormone that causes contractions. If there is enough adrenaline in your system, the oxytocin can't do its job. This makes sense. If you are in labor and a bear appears, you want labor to stop long enough for you to run away from the bear and get safe, at which point labor can begin again.

My midwife's reassurance and calm helped stop the adrenaline that was causing me so much discomfort. She had reassured me that I was still at fairly low risk for infection. I was negative for group B strep. Since my water had broken, nothing had entered my vagina (essentially, no one was performing vaginal exams) that could introduce any new bacteria. If I was at all concerned about infection, we could do a prophylactic iv dose of antibiotics. My baby was moving fine, so he was tolerating the loss of the fluid and the contractions. I was taking my temperature often to make sure it was normal. We were being cautious, without being overly strict about the rules.

Her pep talk was exactly what I needed in that moment. I knew I was in good hands.

In a few more hours, I was on the phone with her again, this time to tell her that I was really in labor and things were getting serious. By the time she arrived, I was almost ready to push. As my labor progressed and things got intense, I found that calm and zen place I remembered from my previous births. I found the confidence in my body and the trust that my baby had chosen his birth date. None of the discomfort I was experiencing was a result of any anxiety. I was having strong painful contractions and they were bringing my baby into the world quickly.

My son was born only about 45 minutes after my midwife arrived. His entrance into the world was exactly how I had hoped it would be. It was almost hard to believe that a few hours before, I was despairing and labor wasn't going anywhere. Who can say if it was the conversation I had with my midwife caused the turning point in my labor? Perhaps it was just timed right. Perhaps it was as much because I had put the older kids to bed and could focus on myself.

But I can say with assurance that her pep talk was exactly what I needed in that moment. I knew I was in good hands. I knew things weren't dire. I knew that I was in charge of my decisions. I felt empowered, informed, and confident. My son's birth was beautiful, and I have no doubt that my midwife was exactly the person I needed to help me welcome him.