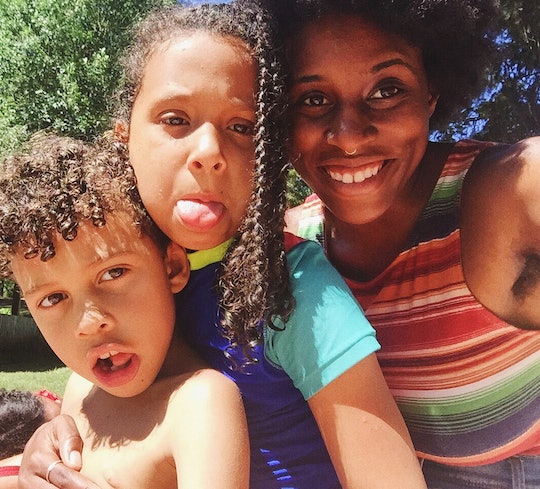 Motherhood is life changing and magical. It shows you a new type of love, one you didn't know existed before, because the only way to know about it is to live it. Motherhood can also be isolating. As it brings a new being into your life, it also propels you into a new season of life, which, similar to this new love, takes a lot of adjusting to.

There is no "normal" to being a parent. What works one day undoubtedly won't the next. There are sleepless nights that come with no rhyme or reason why your baby suddenly can sleep through the night one week, but not the next. There are days where leaving the house feels like you've climbed the largest mountain, and yet somehow, you've barely made it anywhere close to the top. I've never actually climbed a mountain, but I imagine that feeling of conquering something so big and so tall is similar to how I felt on the mornings when I got my two children dressed, fed, diapers changed, and out of the house before 9 a.m. When you're a parent to a brand-new baby, phone calls get pushed off and responding to texts in less than 24 hours becomes harder. When I became a first-time mom, keeping up with friendships wasn't the priority it once was. But sleeping was. Having a moment alone in the bathroom was. Showering once a week was. In those early days, it was all about survival.

Trying to make plans seemed to be more of a hassle than anything else. There were always nap times and mealtimes to consider, schedules to work around, diaper changes and snacks to make time for.

With my first child, I didn't feel the isolation. During the first few months of her life, we celebrated holidays, we got pregnant again, lost a baby, got pregnant a third time, lost jobs, got new ones, and moved. By the time my son arrived, we had a 14 month old, were living in a new town, and were so tired. Even though I would spend time online, reading and feeling as if I was interacting with people, I felt lonelier than I ever had. My life had become a routine, one I was doing without very much thinking. And that routine didn’t necessarily include other people. Everyone I'd known before having children were friends who weren’t planning on having children anytime soon. When I met other women with kids, they were usually older than I was and had children who were older than mine. Trying to make plans seemed to be more of a hassle than anything else. There were always nap times and mealtimes to consider, schedules to work around, diaper changes and snacks to make time for. Day after day, the only people I talked to were my children — my very small children who could barely talk back — and that wasn't not enough to make me feel less lonely.

How do you tell your friends who want so badly to be parents that for a lot of the time, parenting sucks?

At one point, I even began to wonder why a person would want to have children in the first place if it meant that they were cut off from others. Who would want to constantly eat half-eaten sandwiches laced with spit, or look forward to the once a week grocery store trips? Who would choose this life? I knew this wasn’t the narrative for everyone, but it was mine, and I was distraught at the prospect of the next 18 years being as lonely as they were. I was afraid to be honest with people around me because I felt as if I was weak for allowing the difficulties of motherhood get to me.

I figured I wasn't alone in my thinking, but it still caused me to pause and give a different response whenever people asked how I liked being a mom. How do you tell your friends who want so badly to be parents that for a lot of the time, parenting sucks? How do you tell them that most days consist of the same things: poop, literal spilled milk, crying — oh, so much crying — toys, and worrying about the needs of someone else? I couldn't tell them about how my daughter's nap schedule was so militant that we were basically prisoners in our own home. So I told half truths, saying I loved it, that I was lucky, that it was a dream. Because all of those things were true — it just wasn't the whole truth.

Somehow, I met three other women who were experiencing the exact things in motherhood that I was. And when I met them, I don't think I'd ever felt as relived as I did they affirmed my fears and my feelings. It was as if, for the first time in 17 months, I could really breathe easy. It wasn't just happening to me, it was happening to all of us. Trudging along, crossing our fingers that it got a bit easier, that things would be a bit lighter soon. These women held me up and supported me. Together, we gave each other the space to complain, to whine, to just be ourselves once again. We didn't have to pretend we were doing the perfect thing or even the right thing. We just had to show up and revel in each other's love.

Once (and truly, many times), I cried on the phone with my mom while talking about how I felt like things would never change. I asked her how raised us and kept her sense of self. I asked her how her mother did it, how women before us did it. She reminded me that often times, women were surrounded by family and extra hands there to help. She reminded me that we're never meant to be on our own. Motherhood isn't about doing it all or having it all, and it's certainly not about standing alone. Ever since that conversation, I've seen motherhood differently. It's not a lonesome place for me anymore. Instead, it's a shared place. One that's for all of us experiencing motherhood: the good, the bad, the in between. I've learned that it's impossible to raise children on your own, impossible to show up each day at your best. I feel that as parents, we were never meant to carry the joys and sorrows by ourselves. It's a beautiful shared experience. Thankfully I've not only realized that, but I've also gotten to live it out by being honest and open about how parenthood has been for me. I've found people who understand and support me and that's made all the difference.