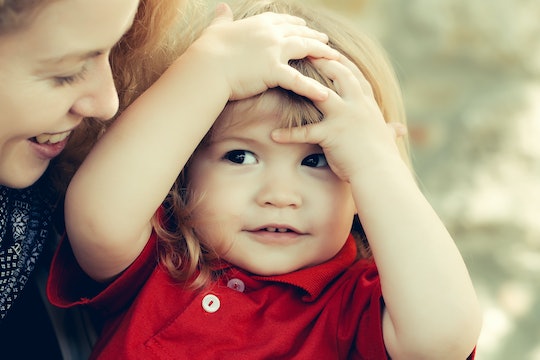 Honestly, Teaching My Kid Consent Is My Most Important Job As A Parent

When I had my baby last summer, one thing I was struck by was how totally dependent he was on me and his other mom for literally everything. It might seem like too obvious a thing to even need to say, but new babies are, well, new. And they're counting on their parents and caregivers to meet their physical needs, to meet their emotional needs, and to teach them how the world works and put their experiences in context. As my kid slowly — and way too quickly — grows up, I'm constantly in awe of how smart and capable this tiny human I created is. But I'm also in awe, still to this day, of how much he needs, and of how much he looks to his parents. And one of the bigger things he's counting on us for, maybe one of the biggest, is to help him figure out how consent works.

Notice that I say "help him figure out how consent works." That's because I don't think that it's reasonable to treat the idea of consent like it's some new-fangled concept. Even little babies want and desire independence and autonomy, and for a toddler (which is the stage my child is currently in), a lot of his exploration is about figuring out where he ends and other people begin. No matter what we do, he's going to grow up with some concept of what the self is, and of how he should interact with — and show respect — for others. We aren't imposing the concept of consent in a weird top-down sort of way, instead we are nurturing him, and guiding him toward a healthy understanding of his own rights, and everyone else's.

When we talk to our toddler about bodily consent, what we're really talking about is everyone's right to bodily autonomy. On a basic level, it should be up to you what happens to your body, and those of us who believe in consent believe that you never have to do anything with your body that you aren't comfortable with. That means that — no matter who you are — you are not ever obligated to (for example) kiss, hug, or have any other kind of physical contact with another person, just because that person wants you to. This extends to sexual contact as well, of course, but I believe that some of our problems with consent "in the bedroom" stems from our culture's trouble grappling with the concept as a whole.

If my child doesn't want to hug me, even if I really want to hug him, that's his right. And if my kid wants to kiss another child, but that other child says no, that's a boundary that has to be respected as well.

Let's make it personal here. If my wife wants to have sex with me, I get to choose whether or not to consent to that, because it's my body. And I get to revoke that consent at any time. The same is true if all she wants a kiss, yes, even though we are married to each other and madly in love. And the same rule applies to my kid, or anyone else's kid. If my child doesn't want to hug me, even if I really want to hug him, that's his right. And if my kid wants to kiss another child, but that other child says no, that's a boundary that has to be respected as well. When I talk about "teaching consent" to my child, what I'm talking about is teaching him this very basic, and very useful, concept.

If he says "no," I back the hell off, even if I suspect he's joking.

Understanding consent is vitally important, both for my kid's ability to protect himself from various kinds of assault, and his ability to be an emotionally productive member of society who doesn't hurt others. Rape culture is fueled by a lack of understanding of consent. Without consent as a basic framework, people often use really terrible arguments to justify things that were actually assault. Just think of any time you've read about a rape case, and people defended the accused rapist by bringing up what the victim was wearing. We, as a society, need to understand that a "slutty" outfit does not constitute consent, having a relationship with the person does not constitute consent, and literally nothing constitutes consent other than saying "yes." And my child may still be very young, but he's a member of this society.

Ever since he was incredibly small, my spouse and I have tried to practice consent with our child. It actually wasn't that hard. Even before he was verbal, we just made a rule for ourselves that we didn't engage in any non-necessary physical contact with him unless he seemed "into it." Because he was a baby, we sometimes did have to override his wishes for things like diaper changes, medical exams, and the like, but we were very careful (and still are) to distinguish between the two. If he winced or pulled away from an embrace, we set him down and gave everyone a breather to see what was up.

Similarly, whenever well-meaning friends and family have tried to be physically affectionate with him when he's clearly not having it, we call them out, and remove him from the situation. Recently, he developed enough language skills to say "yes" and "no," which has made our jobs in that area so much easier. If he says "no," I back the hell off, even if I suspect he's joking. He needs to know that saying "no" matters, that his voice will be taken seriously, and that by extension, so will everyone else's. And besides, if he is joking, he'll let me know when he's ready.

We never ever tell him he has to hug or kiss anybody, under any circumstances.

Sometimes you don't get what you want, and if that's something I want him to learn, I need to be willing to practice what I preach.

Even though it's fairly simple and straightforward, teaching consent to a toddler is not without it's challenges. Most of those challenges, though, are about me and not him. I'm forced to remind myself that it isn't his responsibility to make sure I'm emotionally fulfilled; that's my own responsibility. It can be painful to really, really want to hug your kid, and be told no, but that's just how life works. Sometimes you don't get what you want, and if that's something I want him to learn, I need to be willing to practice what I preach. Teaching consent also can bring up old feelings about times when my consent wasn't respected the way it should have been, and that can be a real prickly thornbush of emotions for me. Ultimately though, I think dealing with those things is more than worth it.

The thing is, parenting is all about raising up these little people who will one day be big people. One day, my kid will be completely independent from me. And not to put too fine a point on it, I need to know that he isn't going to rape anybody. And I need to know that if someone — anyone — ever violates him, he'll understand that that is not OK, and be able to ask for help. I want to raise a child who is compassionate, thoughtful, and kind. And understanding consent is absolutely necessary for that. It's desperately important, and it might even be the most important thing, because so much of his own and others' safety is riding on his ability to understand consent.

I have so many important jobs as a parent of a young child. I feed him, I keep him as safe as I can, I keep him as healthy as I can, and comfort him when something is wrong. All of that is massively important, and yet I don't think I can overestimate how important helping him learn about consent is. Consent is the framework for how my child learns to respect other people, and how he learns to demand respect in return, and as such, it's the backbone of how he forms interpersonal relationships. And honestly, there's not much more important than that.