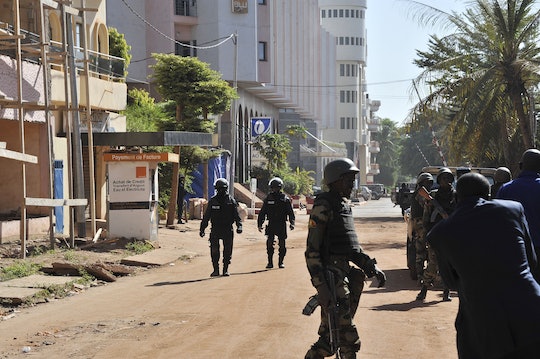 UPDATE: UPDATE: On Friday, the Islamic Militant Group Al Mourabitoun claimed responsibility for the Mali attack, along with al-Qaeda. At least 21 people have been confirmed killed, along with one American.

The two gunman who took 170 hostages at a Mali hotel Friday morning have been killed, AFP reports.

EARLIER: Firing as they entered the building, two gunman took 170 hostages in a Mali hotel attack Friday. The men reportedly held 140 guests and 30 hotel employees at the Radisson Blu hotel in central Bamako, the nation's capital. According to CNN, two Malians and one French national have died. The Malian army along with U.N. troops surrounded the hotel, and some hostages have been released, including three U.N. personnel. The hostages were freed when they recited verses from the Koran, Reuters reported. No one has yet claimed responsibility for the attack.

The raid occurred one week after an ISIS terrorist attack on Paris that killed 129 people and wounded over 350. Mali, a former French colony, was occupied by Islamist fighters in 2012, and some were thought to be connected to al Qaeda. An operation led by the French army drove them out in 2013, but there are no French troops currently stationed in Mali.

China's state news agency reported that there were Chinese tourists trapped in the hotel. Turkish Airlines reported six personnel inside as well.