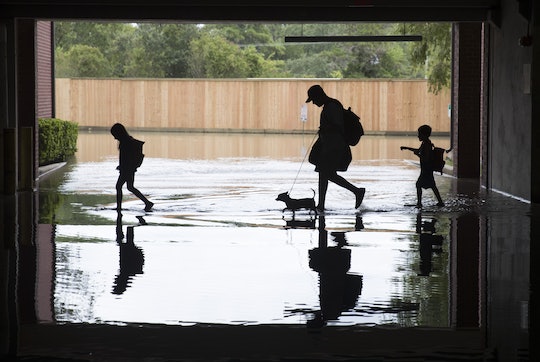 How Houston Public Schools Are Helping Students After Hurricane Harvey

As much of Southeastern Texas begins to put itself together following the devastation of Hurricane Harvey and its devastating aftermath, more and more unanswered questions continue to emerge. How long will repairs take? How many people are now without homes? Or jobs? What about school? Of course, so many of these answers remain up in the air as relief efforts are still in the beginning stages. But, one thing has just become certain: Houston kids will not go hungry. Why? Because Houston public school students will get free meals throughout this academic year — and that’s a huge deal.

According to a release from the Houston Independent School District, “all HISD students will eat all school meals for free during the 2017-2018 school year.” Before Harvey, the school district had gotten approval to provide free lunches and breakfasts for eligible students. Now, though, the United States Department of Agriculture and the Texas Department of Agriculture has given HISD permission to skip the National School Lunch/Breakfast Program’s application process — meaning that every student enrolled in HISD will be able to have three meals per day completely paid for.

Before students can participate in this program, though, parents will need to fill out an application, solely to “the district to secure funding and track student data.”

According to HISD Superintendent Richard Carranza he said in the statement:

The flooding that is affecting the city of Houston has been devastating to so many. Some of the areas that are the hardest hit are filled with working parents whose limited funds will need to go toward recovery efforts. This waiver will give our families one less concern as they begin the process of restoring their lives. It will also provide a sense of normalcy by allowing students to have access to up to three nutritious meals each and every school day.

And truly, as the city of Houston works together to build itself back up, this latest news comes as some much-needed relief. The storm has reportedly killed at least 30 people, and at least 50 inches of rain has accumulated around Houston, according to The New York Times.

Clearly, this move by HISD is a smart one, but it shouldn’t be the only thing state and federal agencies do to help the people of Texas. Over 2,000 rescues have been made, and so many homes have been destroyed. And it isn’t just in Houston. Smaller towns around the city, as well as along the coast, need support as well. If you’re looking to help out the people of Texas, there are plenty of organizations that could use your help.

Of course, it’s great that Houston area children are getting three solid meals a day as they certainly don’t need to worry about food insecurity at a time like this. This is good news, indeed, but let's not let it be the only good to come from this disaster.