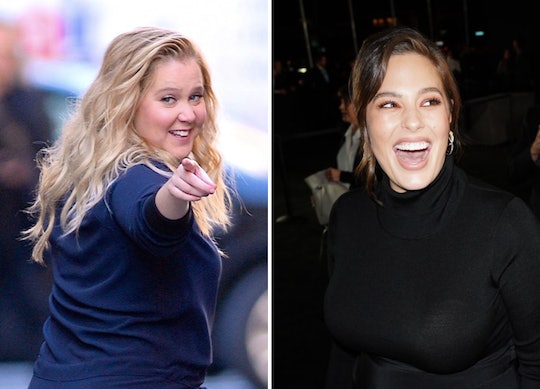 As Ashley Graham Prepares For Motherhood, Here's How Amy Schumer Has Supported Her

If there was ever a celeb meet-up that I'd like to be a fly on the wall for, it might just be the party that brought Amy Schumer and Ashley Graham together. In fact, it was there that Schumer shared how she's supported Graham during pregnancy, who's currently expecting her first child. How do I know this intel? Well, thanks to a new interview with Vogue for the magazine's January 2020 issue, the comedian passed on her words of wisdom.

Graham, who's expected to give birth to her first child next month with her husband Justin Ervin, is one of four Vogue cover stars for the upcoming issue. The model revealed in her interview with the magazine that she and Schumer, who welcomed her first child in May, hadn't actually met in person until recently. However, it appears the comedian managed to make quite the impression.

During the interview, Graham naturally spoke on all things pregnancy and even shared that a number of fellow celeb moms have shared advice with her, including Schumer. The comedian was also interviewed for the cover story and shared with Vogue that she and Graham were introduced at a party, and Schumer made it a point to take the expectant mom aside in order to give her the lowdown on this whole motherhood business.

"I was like, 'Come over and I’ll just tell you what I have learned and what I wish I knew,'" Schumer told Vogue. "And then I was like, 'And the nicest thing I can do for you is tell you that you won’t hear from me again, but you can call me anytime.' 'Cause it’s a lot."

Schumer added, "People are so in your face when you’re pregnant because they’re so f*cking excited for you. And you don’t get it. You can’t possibly get it. And then after you’ve had a baby you’re like, 'Oh, I get it!'"

When you're visibly pregnant, it can feel impossible to go anywhere without attention from friends, family, and complete strangers alike — asking about the due date, whether you're having a boy or a girl, how you're feeling today... While some love the attention, it can get a bit overwhelming by the time the third trimester rolls around.

It's not surprising Schumer would offer up her take on it all to a fellow celeb who is expecting her first baby. It wasn't that long ago when she was navigating pregnancy as a first-time mom-to-be, after all. Not to mention, Schumer seemed to have had a solid support system, who she thanked in a May Instagram post following a difficult pregnancy.

"Friends I’ve had for 30 years or people who encouraged me to ‘keep going’ or telling me ‘it will be worth it.' Every woman I encountered is so willing to help and advise you and I felt all their strength," she wrote at the time. "And you were right."

While the world was privy to the words of wisdom Schumer shared with Graham — who is due, specifically, on Jan. 11, as she revealed to Vogue — we'll probably never know if she takes her up on her offer. Even so, it's nice to know Graham is entering motherhood with a solid support system and the rest of us got a bit of advice we can pass on to our own.

More Like This
Blake Lively Revealed She's Pregnant With Baby #4 In A Sparkly Dress & Sky-High Heels
Chrissy Teigen Says Her Pregnancy Cravings Are "Comical At This Point"
Chrissy Teigen Says She’s Come To Understand She Had An Abortion To Save Her Life
Exclusive: Watch Hayden Panettiere Talk About Addiction Treatment 4 Months Postpartum