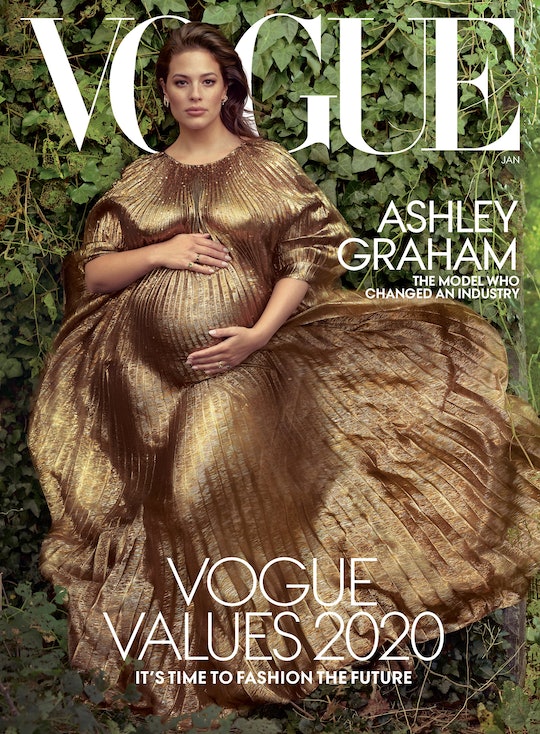 If you're looking for someone to tell you pregnancy is a blissful, uncomplicated, joyous romp into motherhood, Ashley Graham is not your girl. If, however, you want someone to tell you like it is and make you laugh in the process, listen to her. For instance, in a new interview for Vogue's January issue, Ashley Graham dished about her experience with pregnancy hormones and, true to form, she held absolutely nothing back.

The Pretty Big Deal podcast host is due to give birth to her first child with filmmaker husband Justin Ervin, a baby boy, in January 2020. Since announcing her pregnancy, Graham has been sharing updates about her experience that are as honest, thoughtful, and frequently hilarious as a person could want. Like when she shared a list of her pregnancy cravings by basically saying she wants "all the emojis" or crying over the new stretch marks on her body as it changed to grow her tiny human.

Graham is all about feeling all of the emotions, it seems, and pregnancy appears to have amplified that. As she told Vogue, she recently cried out of nowhere because of her hormones. "This is what happened to me the other day," she told the magazine. "I was with Justin, eating an almond butter–and–jelly sandwich, and I took one bite and all of a sudden, I starting welling up. And then full-on crying!"

She went on to explain that they'd recently purchased a new apartment in New York City, but couldn't quite figure out why she was so upset, telling Vogue: "I was chewing and eating and sobbing and I was like, I DON’T KNOW WHY I’M CRYING BUT I’M REALLY UPSET THAT WE’RE NOT GOING TO BE IN THE NEW APARTMENT AND THE BABY IS GOING TO BE HERE!!!!"

It's not just crying that hits Graham at unusual moments, apparently. When she was initially pregnant, she saw her husband washing his hands and told Vogue she thought it was hysterically funny. But then the laughter turned to tears in an instant.

These mood swings will sound pretty familiar to pregnant women, of course. But when you're experiencing them firsthand, they can take a person by surprise. It can be incredibly confusing to feel excited and positive one moment, then find yourself sobbing and full of despair the next. Beyond the fact that pregnancy is such a physically and emotionally taxing time, soaring hormone levels during pregnancy can make it feel as though you have little to no control over your emotions. And make you feel like you're the only one who is living through this emotionally exhausting rollercoaster. Which is why it's so wonderful to have a celebrity like Ashley Graham sharing her experience so publicly and hilariously.