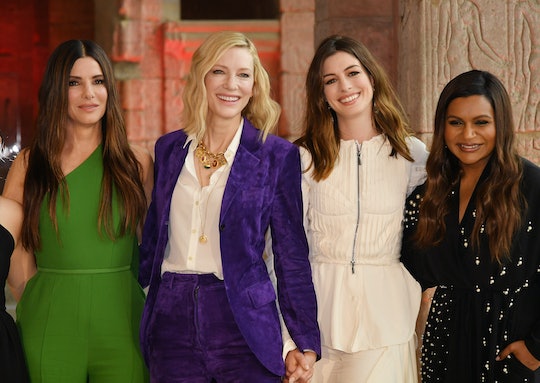 It's clear that the eight fabulous women starring in the upcoming film Ocean's 8 are having the best time promoting the movie together. And as they make their way through the promotion circuit, they have been treating fans to awesome anecdotes and tidbits from the film's set. One of the best ones so far shows how the Ocean's 8 cast helped Anne Hathaway feel confident about her postpartum body — and it just proves that having supportive friends is the absolute best, especially during a transitional time such as postpartum.

In an appearance on The Ellen Show this week, Hathaway opened up to host Ellen DeGeneres about how, at first, she felt insecure in her postpartum body on the set of Ocean's 8. "It was really significant for me because it was my first movie after having my son," Hathaway told DeGeneres. She and her husband Adam Shulman welcomed baby Jonathan in March 2016, and Ocean's 8 began filming around October 2016, according to ComingSoon.net.

"One of the lucky things about being in this business for so long is that I’ve really kind of come to terms with the pressure that you get to look a certain way as an actress and I don’t beat myself up about any of that stuff anymore," Hathaway continued on the talk show. "But after I had my son, the weight was really slow to come off and so I was a different size than I normally am.”

But once Hathaway stepped onto the set, her mindset changed thanks to her ultra-supportive cast mates. She told DeGeneres:

I walked on the set, and, you know, my weight’s a little up, and I’m just aware of it. And I walk onto set, and I’m in my jeans, and I’ve done my best and I’m going to love myself no matter what, and Sandy Bullock looks up and goes, "Looking good, mama!" I was like, ooh! That made me feel amazing. And then Cate Blanchett’s like, "Nice jeans, Hathaway!" I was like, this is so great.

Ten points to Anne Hathaway for truly nailing her Sandra Bullock and Cate Blanchett impressions. But then, perhaps the best compliment came from Rihanna. Hathaway continued:

Bullock, Blanchett, and Rihanna's compliments clearly made Hathaway feel more comfortable in her postpartum body. This just goes to show the power of supportive female friendships, especially when it comes to something as sensitive as recovering from childbirth. "It was just so beautiful to be surrounded by that much love and understanding. It was just great," Hathaway added in the same interview.

This is not the first time Hathaway has opened up about her postpartum body. In a September 2016 interview at the Toronto International Film Festival, several months after she gave birth to Jonathan, she talked about being proud of what her changing body represented, as InStyle reported. At the time, Hathaway said:

I think shape is an ongoing thing in everybody's life. So, I'm not trying to recapture something that was. I'm going with what it is now ... Some things I guess are the same as they were, and other things are a little bit different. I'm just so proud of what the changes signify. So, there's no rush to do anything. I'm so happy being here.

Any feelings towards your postpartum body — whether they're positive, negative, or somewhere in between — are totally normal and OK. It's awesome that Hathaway is so open about her postpartum body, and I personally can't wait to see her and the rest of the cast rock it in Ocean's 8 this weekend.