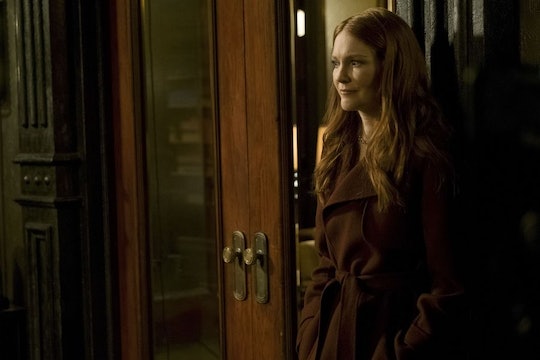 Abby's Side Of The Story Will Be Told On 'Scandal'

Once viewers got over the shock of seeing Huck’s girlfriend shoot a few rounds into him and leave him for dead (has anyone really gotten over that though?), the next biggest shock was that Abby was behind the whole thing. But how did Abby become the mole on Scandal? Even though there was plenty of suspicion around everyone in Olivia’s life, Abby was never really a prime suspect since she and Olivia haven’t even been all that close for a while.

In the promo for Episode 8 "A Stomach for Blood," you can see someone offer Abby $300 million, presumably to work for them and deliver them the information they needed. But since when has Abby been driven by cold hard cash? I mean, $300 million doesn’t even sound like a real number, it’s so much money, but it’s always been power that Abby was after. Even when she was working by Olivia’s side, Abby would butt heads with her friend and colleague because, as time went on, Abby wanted more than to be a sidekick, especially after being the victim so long in an abusive relationship.

Thankfully, the TVGuide description for Episode 8 says, "The events from election night are retold from Abby's perspective, revealing a formidable thirst for power and an explosive secret she's been keeping." It doesn’t explain too much, but it does mean that Episode 8 will give viewers all the answers they need to know about how Abby became the mole on Scandal and what drove her to this point.

Darby Stanchfield (who plays Abby) told ScreenerTV that although she was just as surprised as the rest of us about being the mole on Scandal, the “huge reveal” in Thursday's upcoming episode will be worth the wait. The episode will focus on election night and everything that led up to and followed it, which will give viewers further insight into what drove Abby and got her to where she is now.

Also, she’s apparently been harboring a huge secret too, so there’s a obviously a lot that the chief of staff has been keeping under wraps as she’s been away from OPA and in control at the White House. Back in Season 5 of Scandal, viewers really saw the dynamic between Olivia and Abby start to shift in a major way. Abby was ready to play hardball. She and Olivia had conflicting ways about how to handle former Vice President Andrew Nichols, who was threatening to release the truth about Fitz going to war for Olivia.

At the time, she told Olivia, “I don’t work for you. You work for me.” Later, Olivia warned Abby not to cross her again and enemy lines were drawn. Since then, it’s become clear that Abby is after power and rank and, in turn, power over Olivia. But was her part in this new secret organization and getting Huck shot fueled by that alone? Obviously there’s a lot fans don’t know yet, which is why Episode 8 is going to play out Abby’s official fall from grace.