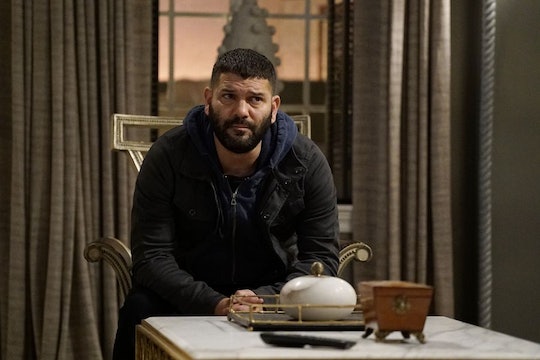 I don't think I'm alone in feeling that Thursday's episode of Scandal felt much more like a season finale than another typical Season 6 episode. The mole in Olivia's life was revealed and in the end, it was Huck who came the closest to figuring it out, but only after Meg shot him multiple times. So is Huck dead on Scandal?

Right after Huck finally reunited Meg and Jennifer Fields, Meg shot and killed her on sight. But just in case that wasn't a big enough shock, she shot Huck a few times too, leaving viewers with the image of a very bloody Huck bleeding out all over the hotel carpet. But she didn't shoot him in the head or heart or any other vital organs, so he's more than likely going to pull through. (Or at least I hope so.) But the more important revelation, other than Huck's girlfriend being yet another soulless killer, was that Abby was behind the whole thing. (Gasp!)

Lately, Abby and Olivia's friendship hasn't exactly been perfect and Abby hasn't been a gladiator for what seems like a long time. It almost makes sense that she would be the one to defect and turn against Olivia by working for the organization that is apparently much more powerful than B613.

In the promo for Episode 8, it looks like Abby was offered literally millions of dollars to be the mole and keep an eye on Olivia to deliver the right information when needed, but there has to be more to it than that. There has always been a sort of tug-of-war between Abby and Olivia, each one wanting the power and reigns in the relationship. And finally, Abby was able to gain that, even if it turned her into a total monster.

I can't imagine Scandal without Huck, so I don't think that some minor, multi-episode character like Meg is going to be the one to kill him, but the fact that she did pump him full of several bullets means that he's probably going to be out of commission for a little while. Or he'll have to go into protective custody like Jennifer did. Apparently, it was important to Abby that Meg kill not only Jennifer, but also Huck, meaning that she's really and truly turned to the dark side now.

Huck's fate on Scandal isn't certain right now, but there's no way that he's going to go out like that in the middle of a season. And if nothing else, it just means that when Olivia finds out who was behind the whole thing, a.k.a. Abby, she's going to pay even more dearly.