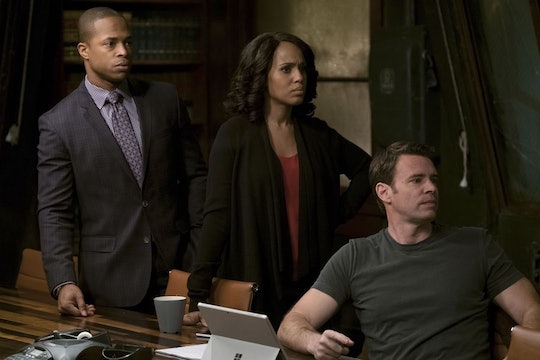 There's A Traitor On 'Scandal'

On a show like Scandal, the bad guys one week are sometimes suddenly the white hat the following week and right now, someone is secretly after Olivia. But out of all of the people close to her right now, who is the mole on Scandal? Someone is hiding something huge and right now, there are a lot of contenders.

As per usual, Scandal gave viewers a case of whodunnit and now that the mystery of who killed Frankie Vargas is out of the way, the next big secret is who the mole is on Scandal, purposefully placed near Olivia to watch her and, if need be, kill her when the time comes.

The most obvious options were Charlie, who is a trained and merciless killer, and Meg, Huck's seemingly meek girlfriend who could be anything but. Then again, both of them could be well-placed red herrings. So who is the mole on Scandal? Until Thursday's episode, Meg seemed totally harmless, but just when viewers were let in on the fact that someone has been keeping a secretive eye on Olivia, she took the opportunity to ask Huck for a one-on-one meeting with everyone's favorite Washington, D.C. fixer. Coincidence? Actually, maybe.

And since the first suspects, Charlie and Quinn, are usually the least likely to be the one in question, fans were able to thankfully rule them out. But if not them, then who?

Thursday's episode of Scandal was titled "A Traitor Among Us," for the sheer reason that someone close to Olivia is a traitor and the person who can't be trusted. But other than the suddenly suspicious Meg, there's always the off chance that someone else in Olivia's life, like Abby or Marcus, is the mole in question.

Just like when fans were trying to figure out who killed Vargas, this was another case of pretty much everyone being a suspect. When Huck accused Meg of being the spy, she genuinely seemed innocent. But then again, anyone working for the organization in control of Rowan would be trained to react in the same way.

In the end, the mole turned out to be none other than Meg, Huck's seemingly mousy and sweet girlfriend. She shot and killed Jennifer on sight and tried to do the same with Huck too. However, even she was reporting to someone else — someone who was the real traitor close to Olivia and pulling all the strings. Believe it or not, Abby was the brains behind the operation and had ordered Meg to kill both Huck and Jennifer without batting an eye. Can this really be the same character who used to be such a trusted member of Pope & Associates?

As for what brought her to take such a dark turn, that has yet to be revealed, though, now that we know the truth, it's only a matter of time.