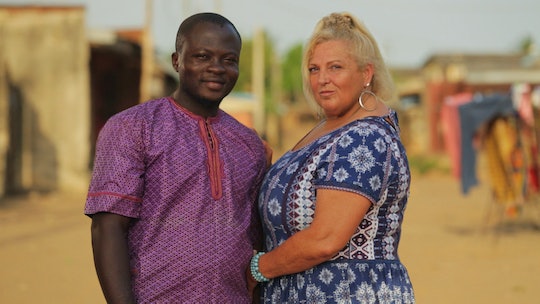 Angela and Michael may not have met on a dating site prior to being cast on 90 Day Fiancé: Before the 90 Days, but they did meet online before they became a long distance couple. So, how did Angela and Michael meet on 90 Day Fiancé: Before the 90 Days exactly? There were no matchmaker tests or algorithms to pair them together beforehand. Instead, Michael, who is from Nigeria, simply sent Angela a Facebook message one day. And from there, they began their digital relationship.

Their relationship then graduated to phone calls and a more serious title than simply online friends. And, Angela said in her "Meet Angela" video, they talked more than two dozen times a day before she finally made the trip to meet him in person. "I just felt the love, so much love for him," she said of the beginning of her relationship with Michael. "We talk 20, 30 times a day."

As viewers will see this season, Angela’s plan upon arriving in Nigeria was always to propose to Michael herself, so she’s clearly in this for the long haul. "I’m about to travel 7,000 miles to meet Michael for the first time," she said in the video as she packs for the trip. "When I get to Nigeria, I’m going to propose to him. He grabbed my heart and ran with it."

What isn’t really clear is how Michael came across Angela’s Facebook profile in the first place. If she wasn't part of any dating site and Facebook is where Michael sent his initial message to her, it does make you wonder how he came across the profile of a stranger who lives thousands of miles away from each other. And I highly doubt they had any Facebook friends in common to begin with.

Even so, they seem to have hit it off from the start, despite Angela being 52 and Michael being more than 20 years younger than her at just 30. According to TLC, part of what initially attracted Angela to Michael was his confidence and that’s what kept her responding to his messages as their interactions progressed into an actual relationship. Angela committed herself to meeting Michael in person. I’m definitely expecting all of her doubtful and skeptical friends and family to play a large role in her storyline this season, though. With these sorts of relationships, that’s almost expected, but their story is sort of unique.

Not only is there a significant age difference between Angela and Michael on 90 Day Fiancé: Before the 90 Days, but also cultural differences they’ll have to contend with. That said, Michael says in the Season 2 promo that he’s excited to be in the U.S. and proudly wears a Donald Trump T-shirt that Angela gives him. But there's no denying that the pairing is unlikely, to say the least.

Since Angela seems to be more of a Facebook user than any other social media outlet, it’s hard to say where she and Michael stand as of right now. He did comment on a couple of her photos recently, so they’re still Facebook friends at least. But depending on how their initial meeting is this season and where their relationship is headed, things could really go either way as of right now.