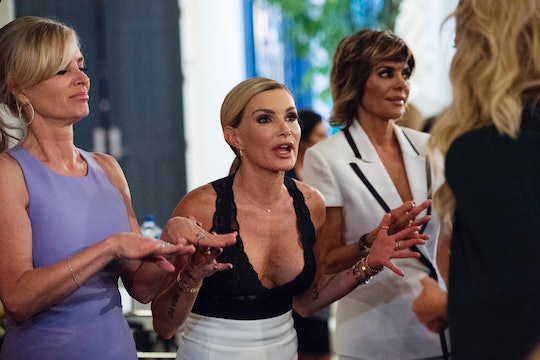 When you're one of the friends on a Real Housewives show and not necessarily one of the official women, you don't get nearly as much attention placed on you. And, as a result, your life isn't as wide open of a book. That's great for some, but when fans have questions about a certain person, like who how did Eden Sassoon meet her husband, for example, The Real Housewives of Beverly Hills is left with things lingering, unanswered in the most unsatisfying of ways.

Since Eden is so new to the world of RHOBH and is considered a friend of the housewives in a supporting reality TV role, finding out information on the Pilates studio owner isn't that simple, especially in regards to figuring out how Eden and her husband met. In fact, Eden's now-ex-husband, Tomer Devito, might be the owner of Native Pictures, a small TV and movie production company, but he's very much out of the spotlight himself. Still, being that Eden and Tomer are still on great terms with each other and continue to be part of one another's families for the sake of their kids, says a lot about how far the two have come together. Even if they are not technically together anymore.

Eden and her ex-husband filed for divorce in 2008 after just four years of marriage and it was around the time, or shortly after, that Tomer started his production company. So how did Eden meet her husband? The Real Housewives of Beverly Hills star didn't get asked to come on the show just because she's another wealthy woman who knows fitness better than any 20-something yoga instructor. Eden grew up in Beverly Hills, so it's very likely that her path crossed with Tomer's at some point within their tight circles of friends.

Since the biggest pieces of information on Eden's ex-husband are that he's a movie producer and gets along with Eden to the point of going on vacation with her, it's all about figuring out how he and the RHOBH star met. This was long before cameras were following her around and even before Eden became a salon and Pilates studio owner after cleansing herself for good of alcohol.

But since Eden is divorced, the romantic aspect of their relationship isn't very well known and, understandably, Eden's ex-husband on RHOBH isn't a big conversation piece. It's not clear how the couple met, but since Eden is a 90210 native and Tomer obviously had some ideas about getting into show business, it's likely that they met by crossing paths via mutual friends. And even though things didn't end up working out, I'm glad they're still on good terms regardless.