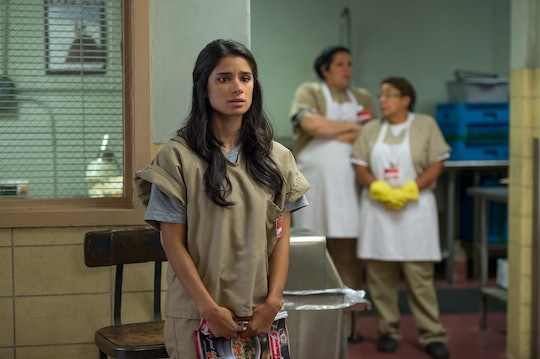 How Did Maritza End Up In Prison On 'Orange Is The New Black'? She Was A Con Artist

And for Maritza, it was all well and good at first, pulling in $50k per year working as a cocktail waitress routinely conning men into paying top dollar for spilled vodka bottles of water and probably tons of other small cons throughout her shifts. But, as with many of the other inmates on Orange Is the New Black, Maritza fell in love with a guy who would eventually be her downfall. After a chance meeting while performing what was obviously her routine con at the club she worked at, Maritza met a con man from a higher caliber who promised quick and easy money. And she would have gotten away with it if it wasn't for that meddling car salesman.

The big con was about first posing as a rich young wife and then a flirtatious car saleswoman in order to steal a Ferrari that was likely upwards of $200,000. Unfortunately, due to a couple of hiccups on the parts of both the car salesman and the mark himself (who was not, as Maritza had been so curious about, named Mark), Maritza's car con almost didn't happen. She ended up getting away with the car herself, but not before both men had driven in the car with her and had likely gotten very clear mental images of the poor girl.

The end of Episode 5 of Season 4 of Orange Is the New Black didn't show Maritza getting arrested, but it's suggested that this last big con, and the only major one she was involved in, was the one that ended up getting Maritza thrown into Litchfield. Which makes the story of the obviously young and very youthful inmate that much sadder, since it was likely the only truly illegal act she had been involved in. Basically, another case of an inmate from Orange Is the New Black falling in with the wrong people. And while Maritza hasn't been making the best decisions so far in Season 4 of Orange Is the New Black, at least she's still got her BFF Flaca by her side, right?