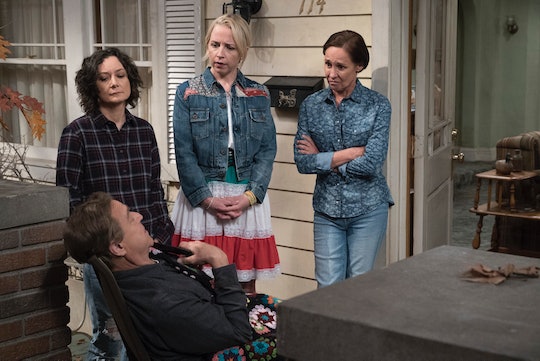 Roseanne's Death Will Be Addressed On 'The Conners'

At one time, fans might have not been able to envision Roseanne without the title character, especially after watching Roseanne Barr and her TV family for years before the reboot. But after Barr’s racist comments on Twitter, she was fired and the reboot was almost immediately cancelled. Now, the rest of the family is back, sans Roseanne, and it will be interesting to see how the show handles her absence. While fans know by now that Roseanne died prior to the spinoff, exactly how did Roseanne die on The Conners?

In August, John Goodman told The Times that The Conners deals with Roseanne’s absence by killing her off. You might remember that at the end of the Roseanne reboot, she went into surgery and prior to that, she’d began having a dangerous painkiller dependency. While the plan may not have always been for that to foreshadow Roseanne's death, Barr told the YouTube show Walk Away that it’s all connected after all.

"Oh yeah, they killed her," she said, of The Conners writers killing off her character off-screen. "They have her die of an opioid overdose." She also said that while she doesn't necessarily agree with the way her character was written off, she’s moved past it. "There’s nothing I can do about it. It’s done. It’s over."

At the time of the announcement about The Conners in June, ABC wrote that the family will face new struggles "in a way they never have before" after "a sudden turn of events." It's likely Roseanne's death that the family with struggle to come to terms with, at least in the first few episodes.

Barr’s stream of racists tweets that have since been deleted compared Barack Obama’s former adviser Valerie Jarrett to an ape and resulted in Barr's almost immediate termination from Roseanne and the reboot’s cancellation. Although only a few cast members spoke about the incident publicly, People spoke to most of them in a recent group interview and they seem confident that the show can and will go on without Barr and her character.

"Any sadness that we feel over what we’ve lost we’re hopefully channeling in an honest way into the show," Sara Gilbert said. "And our show has always been able to deal with heavy topics, particularly for a sitcom. It’s been kind of built into the mix."

Goodman added, "We’re leaning on each other when we do this show and supporting each other — that’s a very strong feeling among us. It’s different, but we can create something new from it. Let us finish the story on our own terms. Come along with us and see how we do."

Sadly, that sounds like The Conners could be used as a final farewell to the family, but depending on how well it does without the original family matriarch, there could still be a long future ahead.

During the now cancelled Roseanne reboot, Jackie declared that there’s "a serious opioid problem in this country" when Roseanne complained about some of her painkillers missing. She said that she needed them for her knee, which hadn’t yet undergone the surgery she was preparing for in the season finale last spring. It makes sense, then, that Roseanne would develop a stronger dependency on the pills after the actual surgery. It’s hard to say if her death will be recent when the new series premieres or if there will be a time jump, but Roseanne is definitely gone for good.

That said, I have complete faith that Darlene can step into the shoes her TV mom left behind.