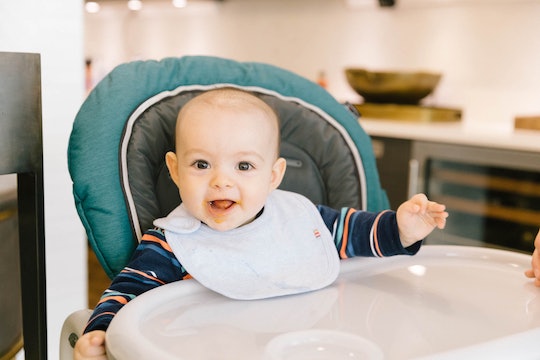 A year ago, I was dead set on calling my baby Olivia. Until, that is, I saw the name was a chart topper. Like most hyper-individualistic millennials, I shied away from the common, and opted for something slightly more unique. This year, the names collected by the Social Security Administration (SSA) have shuffled and danced in the ranks, heralding elementary schools teeming with Emmas, Noahs, Olivias, and Liams. But how do baby names become popular? Why don't parents name baby girls Mildred anymore, or Maude? Why are little boys named Gerald so few and far between?

For answers, Romper consulted Cleveland Evans, Ph.D, author of The Great Big Book of Baby Names. Evans is an expert in onomastics, which is the scholarly study of names — and also, a killer Scrabble word. He explains that naming trends in the U.S. are driven by the desire of most parents to choose a name that's "different, but not too different." Parents achieve this, consciously or not, by slightly shifting the sounds of names that were popular a decade ago. The impact, while subtle, is absolutely visible in the yearly baby name round-up.

"Emma is way up there now, but of course Emily came first," Evans says. "After Emma came Ella, and now we’re bringing back Stella, and that’s how these things go. People find things which sound a bit different, but not radically different from what they’ve heard before — because radically different sounds ugly to them."

However, parents don't necessarily realize what they're doing when they opt for 'different, but not too different' — let alone that other parents are picking names the same way. The result? The same slight variations become cool at the exact same time. So the wheel turns, and this year, Ava's coming up tops.

But there's a fascinating paradox inherent in naming fashions, and it's driven by the internet. "The great majority of parents want to find an unusual name, and it's so easy to find the list of what's common that you have parents using that information to avoid those names," explains Evans. So paradoxically, "giving your child a popular name makes you more unusual than the average parent."

Remember how it felt like everyone you went to school with was named Alex? (Especially if your name is Alex?) Well, today's top-10 name aversion has another interesting effect on classrooms. Because the names at the top 10 apply to a smaller percentage of children than in decades past, thanks to the paradox explained above, your little Benjamin is a lot less likely to run into another Benjamin in the same class.

Of course, there's more to baby-naming trends than the SSA's list. For one thing, parents pick up names from the media around them. Back in the 19th century, that meant novels. (Adorable, right?) In the early 20th century, parents were hugely influenced by movies. In the '50s and '60s, television ruled the roost. "The irony is that it went back to being movies again when everybody got VCRs and DVDs," says Evans, chuckling. "And now, though it’s not the majority, people are taking baby’s names off of video games."

People also tend to avoid the names of infamous celebrities and recent devastating storms, reported Reuters, so don't expect many Harveys in the coming years, for oh-so-many reasons.

I asked Evans if there's such a thing as a perennial baby name — a name unmoved by fashion's fickle winds. "The closest thing we have to a name that never goes away in American culture is Elizabeth, which is always on the top list," he answers. The next closest is Katherine. Unfortunately, these names don't stand the test of time because of any inherent stateliness, but rather, because the possibility for chopping them into pet names is just about endless.

If you're in the market for a baby name this year, consider going against the grain — and picking one straight off the top of the list. Although you'll be choosing from a list of the most popular baby names, it's actually the more unusual thing to do. Alternatively, you can get ahead of the trend, and pick a name off your favorite video game.

More Like This
Gathre’s Winnie The Pooh Collection Is Finally Here
23 Sweet Quotes To Dedicate To Your Rainbow Baby
Double Your Fun With These Instagram Captions For Twin Pics
10 Ways Breastfeeding Is Good For Moms, Too