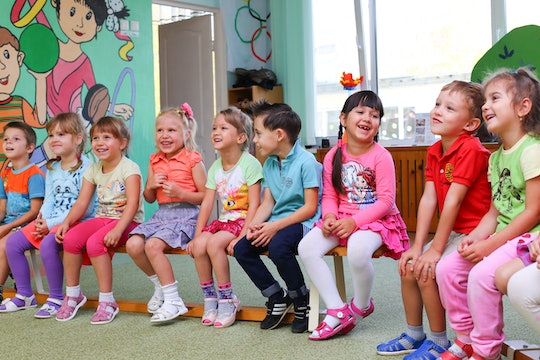 The Best Ways To Prepare Your Child For Kindergarten

Last week, I dropped my toddler off for her first independent swim class. Up until then, we had been side by side, learning how to "kick our piggies" and blow bubbles in the water. I thought she would cry when I left, but instead she smiled and waved. I called my mom and tearfully asked, "How will I ever drop her off for school?" How would we would both someday juggle the inevitable long days that come with early education? Fingers crossed I’ll get my wits about me, but how do I prepare my child for kindergarten?

Alina Adams, author of Getting Into NYC Kindergarten, tells Romper in an email interview that one of the key things parents can do is visit a class before school starts, "so they can meet the teacher and explore their classroom without being overwhelmed by other children."

"If you can't visit the classroom, then take the walk to and from school a few times (or ride the bus or drive) and stroll around the grounds," Adams suggests. "Speculate about what might be inside so that your child is excited about finally running through the doors and getting to see for themselves."

Adams notes that it’s also important for children to know how to undo buttons and belts to avoid problems with bathroom time. She adds that kids should also know they are allowed to "advocate for themselves" by asking to go to the bathroom, get a drink of water, and speaking up when something is bothering them.

"Kindergarteners work so hard during the day at school and their downtime is minimal, so let them be a kid at home," she tells Romper in an email interview. "Read every night and have fun with the books by talking about the author, illustrators, story line, how they would change the ending, and so forth."

Fox says taking some time at the dinner table to talk to your child about school is also valuable. "Ask your child two things they liked about their school day and one thing they would change," she suggests. adding that this works for children from pre-K to high school.

Adams says it also doesn’t hurt to implement a bit of the classroom routine at home, such as a song they sing during cleanup time or favorite story they are reading at rest time. "The more similar you can make their routines, the quicker they'll start to feel comfortable."

Be sure to also begin implementing that routine before school starts, recommends Dr. Thomai Dion of TD The Science Mom. That means if you plan on packing sandwiches for your little one, then make them for lunch during the summer. If you know what time the school day starts, then wake up together and start your mornings the same way you would if it actually were a school day. "That way when kindergarten does begin, the excitement will be accompanied by familiarity," Dion tells Romper.

As for that bittersweet feeling you will have in your heart? Ah, well, you aren’t alone.