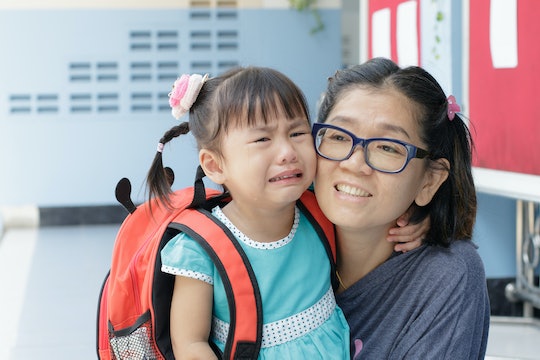 The effort I had to put in to get my kid in a seat at our desired school for kindergarten had prevented me from facing the onslaught of feelings that came with having a school-age child. I was so consumed with the application process that I hadn’t really checked in with the emotional effect of this gigantic milestone. My daughter was more than ready to start school; pre-school had primed her to love a learning environment and though she was shy, she did manage to make a few good friends. I was the one who needed to grapple with this change, which became mind-numbingly apparent when I went through the emotional stages every mom goes through when her kid starts kindergarten. I mean, why didn't someone warn me about this rollercoaster I had willingly (and yet, somehow, unwillingly) decided to ride?!

The thought of my first kid starting kindergarten was shocking. How could she be ready to step into that huge brick building with all those bigger kids, in a class two-and-a-half times the size of her pre-school group, without me? She was so little. We were still tucking her into bed with her favorite blanket she’d been snuggling with since she was an infant. Reading, writing and arithmetic already? There's just no way.

It wasn’t just the bittersweet concept that she was getting older, it was the fear of discovering my shortcomings as a parent in preparing her for this giant leap forward. So yes, it was all about me. After all, she didn’t shed a tear on her first day. Meanwhile, I was a slobbering mess as I worked through the tangle of emotions that came with her starting kindergarten, which definitely included the following: