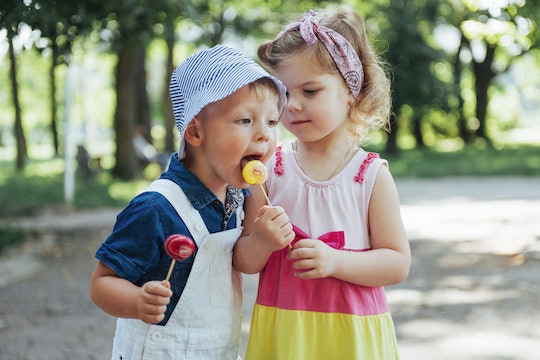 How Do Kids Get HPV? Even A Lollipop Can Be To Blame

Most of the things we vaccinate kids against are typically considered "childhood" diseases (chicken pox, measles, mumps). But the HPV vaccine is a different story, sort of: The dangerous, cancer-causing strain of HPV that kids are vaccinated against today is usually considered a sexually transmitted disease. And since (hopefully) STDs aren't something you have to worry about just yet, you might wonder about the point of vaccinating a young child. But the truth is, it's more complicated than you think. So how do kids get HPV?

First of all, it's important to understand that there are many, many more strains of HPV than most people realize. As Kathryn J. Wright, M.D., tells Romper, Gardisil 9 (the HPV vaccine) is used for the prevention of anogenital cancers and precancerous lesions caused by human papillomavirus (HPV) types 16, 18, 31, 33, 45, 52, and 58. However, there are still plenty of other strains of HPV that can cause health issues (not cancer, but still not anything you'd want your kid to get): Genital warts (condyloma acuminata) are caused by HPV types 6 and 11; common and plantar warts are caused by HPV types 1, 2, and 4. Flat warts are usually caused by HPV types 3 and 10, while butcher's warts are generally associated with HPV types 7 and 2. (So, in case you were wondering if your child's vaccine would protect against the warts kids get on their hands, feet and other easily accessible places, the answer is no.)

"Nine out of 10 men and women will contract HPV at some point in their lifetime," she added. "It is an extremely common virus. We know that HPV is found in those who have not been sexually active and in young children. Especially in young kids who are HPV+, we rarely know how they contracted the virus."

As an example, Dr. Wright points to oropharyngeal squamous cell carcinomas (cancerous growths often caused by HPV), particularly those in the tonsil area and at the base of the tongue.

"While most of these oral infections are caused by sexual activity, it’s theoretically possible to be infected in other ways, such as sharing a lollipop," she says.

Boys appear to be especially vulnerable to these HPV-related cancers of the mouth, tongue and throat, according to the Centers for Disease Control. Men can't develop cervical cancer from HPV, of course. But as NBC News reported, the rates of mouth and throat cancers are more than four times higher among males than females.

"There is an epidemic of HPV related cancers in men, specifically those of the tonsil and the back of the tongue," professor of gynecologic oncology at MD Anderson Cancer Center, Dr. Lois Ramondetta, told NBC News.

"What's really important to know about those is that there's no screening test for those," she added.

So yes, boys need to be vaccinated, too. One reason to vaccinate kids is to protect them from HPV before they're exposed to it; another reason is that children tend to get longer and better protection out of vaccines than adults because they have stronger immune responses. And while many parents still feel uneasy about the HPV vaccine because it's new (or because they don't fully understand the implications of the virus or how it's transmitted), medical professionals consistently say that the benefits far, far outweigh any potential risks.

"The HPV vaccine is one of the most effective cancer-causing vaccines our children are able to receive," Dr. Burgert says.

"This vaccine has revolutionized cancer science and the association of cancer with viral infections. Cervical cancer is one of the most common cancers in women; head and neck cancers some of the most deadly. We have a safe and easy medication to protect the next generation from suffering from these diseases."

More Like This
Can Elderberry Help Prevent Illness In Kids? Doctors Weigh In
What Is RSV?
The Best Halloween Family Pajamas To Match Your Boos
Endometriosis & Your Sex Life