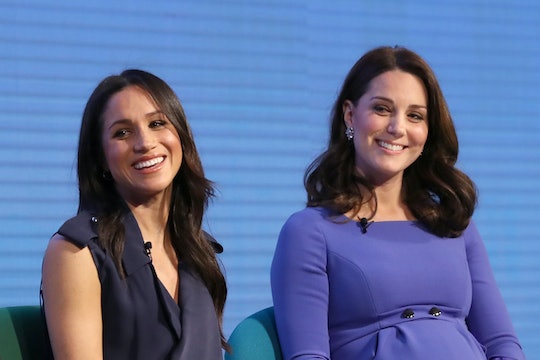 Devoted followers of the royal family have had no trouble finding details about the upcoming royal wedding to obsess over, from the obvious stuff like the particulars of Meghan Markle's dress to questions for die-hard fans only, such as whether she'll carry a sprig of myrtle in her bouquet (according to royal bride tradition). One aspect of Prince Harry and Meghan's nuptials that the internet has been examining in-depth is the invitation — specifically, the small but perhaps significant ways it differs from the last royal marriage's invite. So how do Meghan Markle and Kate Middleton's wedding invitations compare?

Obviously, all royal events and practices rely heavily on tradition. In fact, tradition is kind of the royal family's "brand," so to speak. It goes without saying that countless fans the world over would be incredibly disappointed if Harry and Meghan decided to be the first royal couple ever to reach out to their guests via Evite or Paperless Post. Indeed, one would imagine that the couple were expected to adhere to some fairly formal ground rules: A dark, scripted font, gilded edges, very official-sounding language. Still, Harry and his betrothed's invite isn't a carbon copy of the one sent out for his older brother's ceremony. And while the differences aren't huge, they could be more meaningful than you might think.