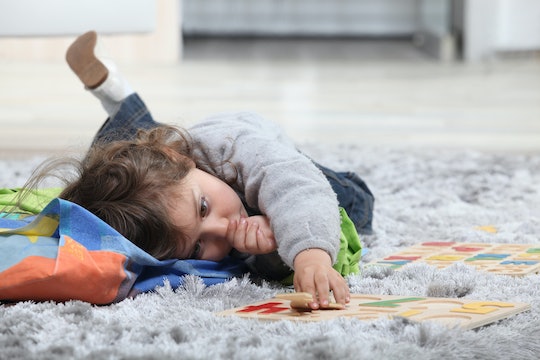 As a mom, I often feel like I'm a pro at saying "no" and "don't do that." I want my kid to be free, don't get me wrong, but I constantly have to prevent him for doing something that could be potentially damaging. For example, his thumb sucking. Sure, it’s a way to self-soothe and I wouldn’t encourage a mom to stop her baby from doing it, but eventually you have to get your kid to stop sucking their thumb for their own good. And believe me when I say it's nothing short of a challenge.

My son was never a pacifier kid. He used one during his stay at the NICU, but once he came home he preferred his thumb. My partner and I thought it was sweet, and it really wasn’t a problem when he was a baby. Before we knew it he was very attached to his thumb, though, whether it was to show he was hungry, sleepy, or upset. When he entered toddlerhood I recognized it was a comfort issue, and tried to replace his thumb with stuffed animals and blankets and toys. Those attempts were futile, though, and he would suck and chew his thumbs raw to the point he’d end up with open cuts.

My partner and I used bandaids (because who liked sucking on bandaids?) and it definitely helped reduce his habit. He still sucks his thumb a tad, but it’s definitely less than before and we’re hoping he eventually finds new ways to self-soothe. I asked other moms to share how they’ve been able to end this habit (or how they’re working on it), and you better believe I'm about to try some of the following: