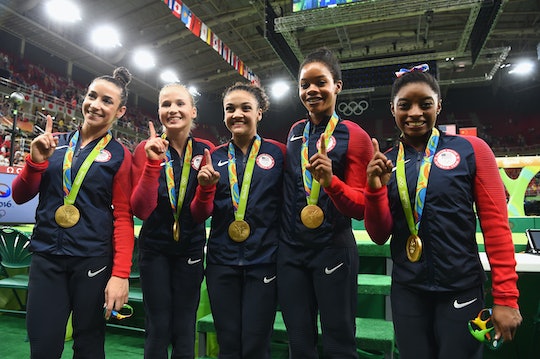 How Do You Qualify For The Women's Gymnastics All-Around? It's A Prestigious Opportunity

Before Olympians can duke it out for gold medals, they have to get through the qualifying rounds. One event that is always closely followed here in the U.S. — from the very first qualifying events through to the finals — is gymnastics. Our women's team has already taken home gold this year in Rio, but how did they get there? How do you qualify for the women's gymnastics all-around?

It's probably no surprise that the qualifications for competing in the Olympics in general are pretty intense, but once the athletes arrive and begin competing against each other for the chance at a gold medal, it gets even more intense.

No matter how many gymnasts the U.S. team brings to compete in the qualifying round (this year there's five), there are only ever two spots allotted to each country to compete for the gold in the all-around finals. Even if, say, the top three high scores all came from the same country, they would still only be allowed to send two of their gymnasts on to the finals.

This seemed like it could have happened this year, since the U.S. team is so strong: if, for example, Simone Biles, Ally Raisman, and Gabby Douglas had placed as the top three for an event, only the first two would move on from the qualifying round to represent the U.S.

The rules state that gymnasts can head to the qualifying round at the Olympics one of two ways: either they can finish at the top of their qualifying games in the CI competition before the Olympics, or be nominated by the committee to receive a spot on the team. Both methods are employed to make up the team, because only one gymnast can make the team through winning the top spot at the competition for individual qualifications.

When the team is selected, all the athletes will compete individually and as a team throughout the Olympic qualification rounds, and then ultimately, those who come out on top will have their shot at a gold medal.

How Do You Even Make It To The Qualifying Round?

The scores that separate the top few Olympic athletes are always very close, sometimes even a fraction of a point is what separates medalists. It's the best of the best competing for the ultimate win — an Olympic Gold Medal — but everyone has to start out somewhere, right?

Most gymnasts begin at a young age, taking tumbling classes at their local YMCA or gym even as toddlers. If parents want their child to have a shot at the Olympic team, they usually put their child into their first gymnastics class as soon as they can walk. Little kids are naturally more limber, since they haven't finished growing yet, and teaching them the basics of form and safety can set a good foundation for competitive performance when they're a bit older.

The requirements for each Olympics changes slightly from year to year, but coaches are usually well aware of where their athletes need to be before they could make the team. Then, the teams are chosen (for both men and women's gymnastics) by a committee that evaluates skill, technique, and performance of the gymnasts submitted to them — most of whom have been on the competitive circuit, often competing in national and world gymnastics competitions (and winning them).

This means they've already qualified at what's called the "elite level"; in the U.S., there's a Junior Olympics Program that helps foster the next generation of athletes, preparing them to qualify for the next Olympic games. As of last year's fall admissions to the program, there were 91,000 athlete members — 75 percent were in women's artistic gymnastics.

The levels of membership range from 1 to 10, where 1 is the basic introductory level and 10 would be ready for Olympic prep. As young athletes advance, they aren't allowed to skip levels, but they might be competing at more than one level at the same time.

A level one member can be as young as 4 years old, and most level 10 members are around 9 or 10 years old and can't achieve the coveted level 10 membership unless they place in the top 12 during the annual level 10 competition. Once a gymnast reaches the elite level, he or she can begin being considered for the Olympic team.

However, female gymnasts won't be eligible to compete in the Olympics until they are 16 years old; male gymnasts must be 18. It used to be 14, but the age requirement was raised in 1997 due to injury concerns for young athletes who aren't finished growing yet. Though, some have pointed out that the immature skeletons of young athletes might actually be better able to handle the demands than older athletes who are less flexible.

All five members of the U.S. Women's Gymnastics Team are under the age of 25.