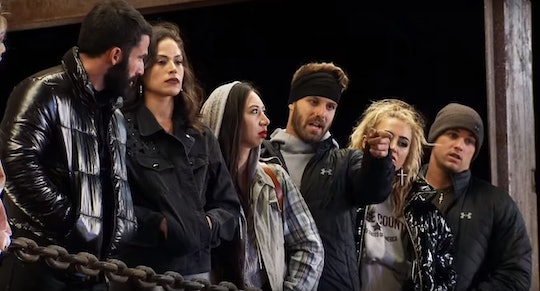 The Double Elimination On 'The Challenge' Is Literally A Game Changer

The Challenge isn’t just any ordinary reality competition show. There are many layers and twists that throw off the players and fans alike. So when T.J. announced in the promo that tonight’s episode would feature a double elimination, viewers were a little confused. Since the show changes from season to season, that could mean almost anything, and it’s still so early in the season. Although it’s hard to say for sure how a double elimination on The Challenge works this season, there are a few details from past seasons that might make it easier to understand.

During The Challenge: Vendettas, there was also a double elimination relatively early in the game. The teams were a little bit different, but essentially, there were more people chosen to vote on to compete in the elimination challenge and that could be the case this season. Right now, two teams are voted on to compete in the challenge each week with one of them left standing, resulting in two people being eliminated.

A double elimination on War of the Worlds means that four people will go home instead, and that’s kind of a big deal. This could be the chance for old rivalries to come to the surface, depending on who gets to be in the tribunal. It also means that some rookies might feel the brunt of the punishment.

On War of the Worlds, the double elimination twist could go a similar way. Once the tribunal chooses the teams to be thrown in the ring and the votes are cast, one of those teams might get the chance to choose another team to go against. This would mean three teams, and six people, go on the killing floor and only two are left standing.

Either way, four people are going home tonight and given the eliminations so far, it really could be anyone. As soon as someone with a vendetta against another player is put in the tribunal, that could mean war if they have their sights set on getting another player out of the game. But if one of the chosen teams for elimination gets to choose a team to go up against on the killing floor, that adds a whole other layer to things. A team who thought they were safe after the nominees were chosen could be up for elimination. But could another well known vet really be out like Johnny Bananas was last week? I would say that this season is totally bananas, but maybe it’s too soon.

It's hard to say for sure how a double elimination works on The Challenge: War of the Worlds. But, more than likely, four people are going to go home tonight and no one is really safe. Well, to be more accurate, whoever is in the tribunal will be safe and Georgia and Hunter are safe since they won the relic last week. But other than them, almost anyone could be thrown to the wolves. And by wolves, I mean the other teams picked for the elimination ceremony. This double elimination is definitely going to take things up another couple notches.