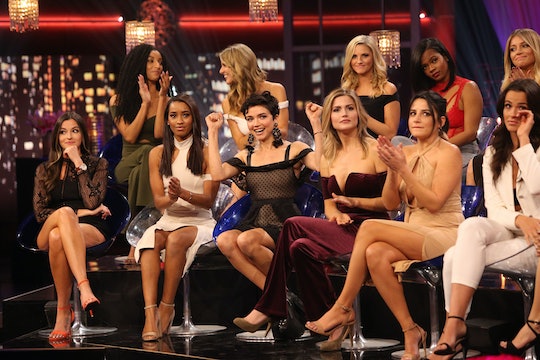 Arie's 'Bachelor' Season Could End With A Jaw-Dropping Twist

With hometown dates behind us and fantasy suite dates finally here, that means Arie Luyendyk Jr. is finally about to choose the woman he wants to marry. It's been a season full of highs and lows for sure, and a handful of memorable contestants we can only hope to see on Bachelor in Paradise, but how does Arie’s Bachelor season end? There's still a lot more drama to come, that's for sure.

Even though the show technically ends when he proposes and his intended says yes, there's still After the Final Rose, which usually let's fans in on what happened once the cameras stopped rolling. It also gives the runner-up the chance to talk to the Bachelor himself about where things may have gone wrong or to confront him about how things ended. You know, just the juiciest stuff to close out the season.

But since Chris Harrison promised a legitimately dramatic and unique conclusion to the season during the Women Tell All special, I think it's safe to say that Arie’s season of The Bachelor is going to end in a way that fans aren't expecting. I know that Harrison almost has to say that to entice viewers, but Caroline Lunny seemed to confirm that herself when she cryptically told Arie on The Bachelor Women Tell All that she can't believe what he did. His only response was that everyone will see how it plays out on TV, so that only ups the mystery about how Arie’s season of The Bachelor will end.

We do know that Arie fell in love with more than one woman and judging by the promos, potentially ended up telling all three of his final contestants that he loved them. Often, the Bachelor saves that big four letter word for the woman he proposes to, or at least the final two, so Arie being so open about his feelings of love for all three women is already a game-changer, but that’s not all that has yet to go down. First, we have the mysterious ex-boyfriend who looks like he shows up in one of the upcoming remaining episodes. In the promo, his face isn't shown and the contestant he’s there to see and propose to isn’t revealed, but since it obviously confuses things with Arie, the end result can go one of a few ways.

Either Arie will realize that this particular contestant already has a lot going on back home and break things off with her before they can even get close to a proposal. Or he’ll have a long drawn out talk with her to work past the issue together and it will work itself out. But overall, with the way things are going with Harrison’s promises of a truly dramatic ending to the season and Caroline's comments, it leads me to believe that things could get messy with the proposal. As in, Arie does something totally out of left field and flips a coin to make his decision, a la Jordan Mauger of The Bachelor New Zealand. Okay, I really don't see that happening, but it would certainly leave fans and even fellow contestants stunned.

Caroline did talk to E! News after the taping of the Women Tell All and while she once again didn't go into specifics, she did shed some light on her feelings toward Arie and what may have transpired at the end of his season. "I had heard a little rumor along the way," she revealed. "I then called and I had gotten that confirmation and I was furious, honestly. You'll see why. I'm heartbroken the way things went down, the way he handled it. I think it could've been handled much better and it wasn't."

Could this mean that Arie inadvertently broke the heart of one of the three remaining women, but in a way that goes well beyond not proposing to them? The only drama that’s been teased so far is the mysterious ex appearing on the show to really shake things up, but since that’s not really Arie’s fault, you have to assume the two incidents are separate occurrences.

Despite Arie seeming like a genuinely nice guy for the duration of the season, clearly something is going to happen that'll leave fans shocked at the end of it all. Could it have something to do with Arie falling in love with more than one woman and telling them so on the show? I would venture to guess that Arie did walk away as an engaged man, but there’s a lot more to the story that viewers will have to watch play out in the final weeks of the season.