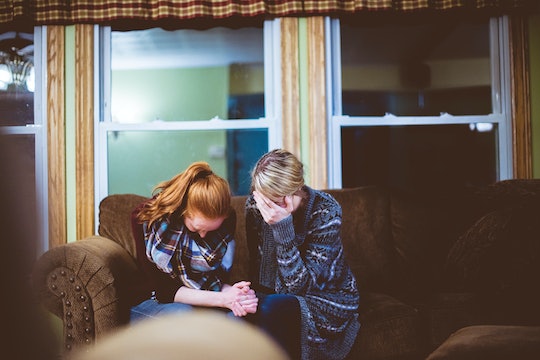 Being diagnosed with endometriosis — a gynecological condition in which the lining of the uterus grows outside of the uterus — comes with a new set of challenges that may mean lifestyle changes. There are concerns over heavy periods, infertility, and other issues such as pain during intercourse. Although there are now a variety of treatment options to manage symptoms and improve a woman's chances of getting pregnant, most who are newly diagnosed want to know: How does endometriosis affect sex?

According to the Office On Women's Health, endometriosis affects more than 11 percent of pre-menopausal American women between the ages of 15 and 44. Having the condition can cause a variety of symptoms, including severe pain during your period, a heavy period and bleeding between periods, pain in the pelvic area, and even fertility problems, according to Medline Plus. Add to that the stress of finding treatment, dealing with possible surgery, a decreased libido, and fear of losing your partner because sex is no longer fun many wonder just what sex will be like when you have endometriosis.

You've probably already heard that sex will hurt. According to an Italian study reported by Everyday Health, more than half of all women diagnosed with endometriosis experience intense pain during intercourse. Even worse, women may feel guilty talking about it with their partners, which makes the whole situation even more frustrating. If you've been diagnosed with endometriosis, there are some things you need to know about potentially painful sex and what to do about it.

Yes, sex will probably be painful. Unfortunately, there's no two ways about it. If you suffer from endometriosis, then you are likely one of the 75 percent of women for whom sex is painful, according to a 2014 Journal of Sexual Medicine study as reported by Shape. Deep penetration in particular can be unpleasant, since it likely puts added pressure on the areas where endometriosis occurs.

Since deep penetration causes the most pain during sex with endometriosis, it's important to switch things up and try different sex positions that may reduce that pain, according to the International Society for Sexual Medicine. The organizations recommended side-by-side sex or any position which gives the woman more control. Find a comfortable sex position and, until you do, keep experimenting.

To make all of that work, you're going to need to focus on good communication. Remembering to be kind, be crystal clear, practice positive reinforcement, and show and tell are just some of the ways that communicating during sex can make it better for everyone.

Communications is especially crucial when having sex with endometriosis, which presents its own set of problems in the bedroom. According to Endometriosis.org, you need to talk with your partner about such things as fear of intercourse, guilt about letting your partner down, and concerns about possible rejections. And, of course, your need to love and be loved.

Another thing to keep in mind is that your sex drive may change due to your endometriosis. Libido naturally shifts throughout your lifetime based on factors such as health, stress levels, mood, and relationship satisfaction. For women with endometriosis, sex drive is also affected by additional factors such as chronic pain, painful sex, taking medications, hormonal therapies, undergoing surgery, and dealing with the variety of emotional issues that come after diagnosis, according to Australian not-for-profit organization Jean Hailes for Women's Health. Brace yourself for that change, and continue to communicate with your partner as your body goes through these changes.

The timing of your period may also affect sex with endometriosis. Many women with endometriosis have mid-cycle pain (meaning during ovulation), so picking the right time of the month for sex is really important, according to Everyday Health. Your best bet may be to have sex from the last days of your period to just before ovulation and again after ovulation until a few days before your period begins. Depending on your cycle, there's a way to avoid the worst pain.

Ultimately, if you are too frustrated by your endometriosis, it's important to talk to your doctor about your options — including surgery. According to a study published in the European Journal of Obstetrics and Gynecology and Reproductive Biology, as reported by Endometriosis News, the quality of one's sex life improves after surgical removal of endometriosis. In fact, the study cites surgery as an optimal treatment for pain relief that improves sexual activity, quality of life, and mental health.

More Like This
My Fertility Journey Began In A Cold Doctor’s Office, But It Was Also Weirdly Romantic
50 Love Song Quotes That’ll Give You The Feels
Bringing Home A Partner For The Holidays Isn't Always A Hallmark Movie
50 Warm & Wise Quotes About Blended Families