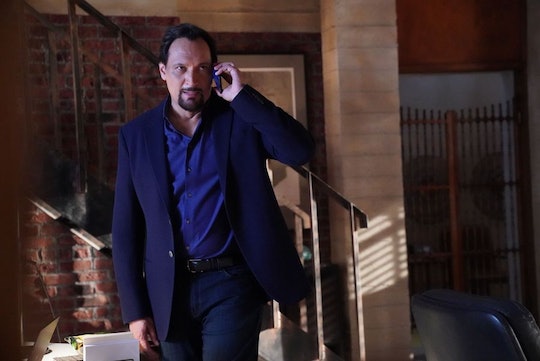 Isaac Is An Important Piece To The Puzzle On 'HTGAWM'

Since the truth has yet to be revealed regarding Wes’ killer Dominic, I think it’s safe to say that fans are allowed to be on red alert when it comes to any new characters on How to Get Away with Murder. This includes Annalise’s therapist Isaac, who seems awfully close to the rest of the gang in the flash forward. So how does Isaac know Laurel on How to get Away with Murder? He could have ties to her dad since we all know Laurel’s father isn’t above having people secretly keep tabs on her, but there’ still plenty of mystery surrounding the new character.

At first, he just seemed like an average court-appointed therapist meant to keep Annalise on track and help her stay focused on the important things. You know, like not covering up murders or resort to drinking. But in both of the flash forwards so far this season, Isaac seems to be playing a big role in whatever happened to Laurel. He’s the one who tells Frank that there were drugs in Laurel’s system and he’s also the one who leaves an irritated voicemail for Annalise, looking for her. Now, I don’t know about you, but that doesn’t really sound like run of the mill therapist duties if you ask me.

The most logical link I can think of for how Isaac knows Laurel on How to Get Away with Murder is her father. She’s already had her suspicions about her dad having something to do with Wes’ death and that Dominic played a huge role in it. And considering that her dad paid a random visit to her on campus, I’d say he has his own suspicions about what she’s up to. So it would make total sense for him to be working with Isaac, much like he was working with the district attorney last season. He could have eyes and ears over every aspect of Laurel's life and the people closest to her — that includes Annalise.

One thing that’s for certain, though, is that Isaac is going to be important on HTGAWM. "Isaac, Jimmy Smits, is our link to a lot of the characters and we’re going to find out how that happened," executive producer Pete Nowalk told Entertainment Weekly. And if Isaac has a link to Laurel’s dad, and therefore Wes’ death, then he could very well be a part of the conspiracy surrounding Wes’ murder.

On the other hand, given that Isaac seems to be genuinely concerned about Laurel in the flash forward, he might be part of a plot to actually take down her dad. He’s spent his career doing shady business dealings on the side and if the FBI or some other law enforcement is going to take him down, why not start with getting an in with his daughter?

Isaac could also be working with Frank and by the time the flash forward is more present-day, Laurel might know the therapist a little better. Frank told Annalise during Season 4 Episode 2 that he’ll always be there for her, whether she wants him to be or not. I took this as his way of watching over her like he’s clearly doing with Laurel, parked outside of Wes’ apartment building. But who’s to say that Isaac isn’t someone in contact with Frank to help him keep tabs on Annalise and make sure she’s alright? And in that respect, Frank might have contacted Isaac the night that Laurel arrived at the hospital or mental health facility where she appears to be in the flash forward scenes.

Since viewers still don’t know what happened to Laurel's baby or where Annalise even is in the flash forward, there are still plenty of plot points to come out in the episodes ahead, but Isaac clearly has an important role throughout the season.