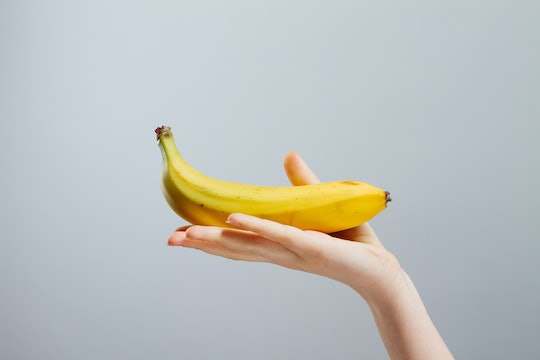 How It Feels When A Guy Enters You Postpartum

Postpartum sex, whether you want to have it or are terrified to have it, is often a subject of curiosity. For many women it is a source of fear, for some it's exciting, and for others sex could be the furthest thing from their mind. No matter where you fall on the sex spectrum you may be wondering, how does it feel when a guy enters you for the first time postpartum? As a mom of two, I can tell you it feels like a cucumber with thorns on it is being thrusted into your vagina. Just joking... sort of. Turns out, sex after child birth varies for everyone, and how your body responds may depend on a few physical factors.

Many couples start toying around with the idea of rejoining the penetration party around the four to six week mark. In many cases, your healthcare provider will give you the green light to have sex around this time, according to the Mayo Clinic. Your doctor will check to see how well your vagina has healed (especially bruises, scratches, and tears). They'll check your uterus, abdomen, and breasts as well. It's important to note; they can't see the state of all of your muscles that were involved in pregnancy and child birth. You may be hurt or injured in a place you don't know about, which could make that initial attempt at penetration really painful.

According to a 2015 study out of the University of Michigan, researchers likened pregnancy and child birth to running a marathon. Except for a marathon, you'd probably train first. In the study, they found 29 percent of postpartum women had fractures in their pubic bones (that they knew nothing about) and 41 percent had undiagnosed tears in their pelvic floor muscles.

It's safe to assume that if you don't allow yourself to fully heal or can't tell if you are, that first time a guy inserts his penis in you may feel like a corroded plumping pipe is being shoved up there. Sarcasm and graphic mental image aside, it basically could be really uncomfortable and even painful.

Additionally, for those women who are recovering from traumatic births with known tears and episiotomies, anything sexual or penetrative might just feel bad. And for a long time. A study published in 2015 in the British Journal of Obstetrics and Gynecology reported that 24 percent of women were still experiencing pain during sex a year and a half later after having a baby. Sometimes it doesn't even matter if you had a traumatic birth or not, it might just hurt. OB-GYN and pelvic floor surgeon Dr. Baharak Amir-Wornell, told Today's Parent that the discomfort may not necessarily be the result of any one kind of birth. She said women who experience no tearing during labor can still have pain related to muscles and nerves that were impacted by pregnancy and labor. A mom who's had a C-section may also have pain issues with penetration for a time.

Beyond painful and bad, it could just feel pretty dry the first time a guy puts his penis in you postpartum. You can blame hormones for this sexual Sahara.

Your estrogen levels are lowered after birth and your prolactin levels — the hormone that stimulates milk production in your body — are elevated. It's important to note: this hormonal roller coaster will happen in your body to some degree whether you sustain breastfeeding or not. The body chemical chaos causes your vagina to have less blood flow, and as a result, less vaginal lubrication.

Lastly, you could be hyper-sensitive down there in a very good way. It's the less talked about bonus side effect of giving birth. The nerves that get damaged during child birth become more sensitive which means you could feel fuzzy and aroused more quickly. It's entirely possible that having a guy enter you after birth could feel like fireworks on the first thrust. From the resources available, this seemingly magic hypersensitivity appears to be less common than the pain many women experience, but the evidence is there that it does exist. Who knows, you may be a postpartum sex unicorn.

The first time you attempt penetrative sex can be scary and fraught with many mixed emotions. The best thing to do is to be gentle with yourself, go slow, and speak up if anything feels uncomfortable or painful. Practicing when you're ready and making adjustments when needed, will help you both find mutual pleasure.