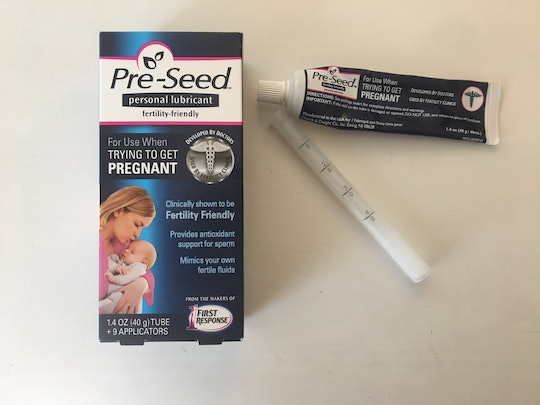 Here's How Pre-Seed *Actually* Helps You When You're TTC

Sometimes you need a little help with dryness during sex — especially if you’re trying to conceive (TTC) and this is day five in a row of doing the deed. Plus, one of the side effects of fertility drugs that many women may take is dryness. So God bless lubrication, am I right? But did you know not all lubes are created equal when it comes to TTC? In fact, some lubes can even kill sperm. To help with this issue, First Response came out with a fertility-safe lubricant called Pre-Seed. But how does Pre-Seed work exactly?

According to my box of Pre-Seed, it has been “clinically shown to be fertility friendly” and it “provides antioxidant support for sperm.” Additionally, it is supposed to mimic your own fluids when you apply it in your vagina, near your cervix, before having sex. It claims to “create the optimal environment for sperm ‘on their journey’.” It comes with one tube of the lube and nine applicators with measurements written in grams. The directions suggest pulling 2 or 3 grams of lube into the applicator when you use it. However, while self-proclaimed “egg whisperer” Dr. Aimee Eyvazzadeh agrees that the Pre-Seed lube doesn’t kill sperm as much as other types of lubes, you should actually use it more sparingly than the suggested 2 or 3 grams, and use it only during foreplay. She tells Romper it isn’t necessarily a pro-fertility supplement — it’s just a safer lube alternative.

“Use enough to lubricate the outside of the vagina, also known as the vulva and clitoris,” Eyvazzadeh says. “Use a very small amount if needed (if vaginal lubrication doesn't happen with foreplay) to the surface of the penis, but use sparingly.” Eyvazzadeh says to make it a part of your sexual play — because let’s be honest, nothing kills the mood faster than “hold on, honey, let me insert this plastic tube in my vagina to squirt this lube up in there real quick”— and she calls it "outercourse." “Start with outercourse and use sparingly, then move to intercourse and vaginal penetration,” she says.

Though not a pro-fertility supplement, Eyvazzadeh says Pre-Seed simply doesn’t kill sperm as much, and it doesn’t necessarily make them swim faster, better, or straighter. “If you take a sperm sample and apply, let's say, KY to the sample, the sperm will die within minutes. If you apply Pre-Seed directly to the sample, the sperm will still be able to move, but you will notice that if you compare to sperm not exposed to Pre-Seed, the not-exposed sperm will be moving much faster and more will be viable.”

Unfortunately, I don’t know very many women who don’t need some sort of lubrication during intercourse, so I asked exactly how much lube she suggests as a "safe" amount. Eyvazzadeh recommends using an amount equivalent to a fingertip.

On the plus side, as far as “ingredients” go, Pre-Seed’s ingredients are pretty clean, especially compared to other lubes, and the first ingredient is purified water. I think this is to replicate what our natural lubrication and fluid would feel like if we produced enough of it. It was also developed by doctors and they claim it’s used by fertility clinics. That seems pretty legit to me.

So unfortunately, it looks like Pre-Seed isn’t technically a magical fertility booster to help the sperm swim faster and live longer, like even I initially thought. It works by creating a better, more “slippery” environment for the sperm to swim in, so they can get to your eggs more efficiently. But apparently, using no lube at all is the best way to make sure the sperm get to where they need to go. However, since most women need lube for intercourse, at least this is the safest and “friendly” alternative when TTC. Look like something you’d like to try? You can get Pre-Seed at your local Target or other big-box store or pharmacy, or you can order it online.