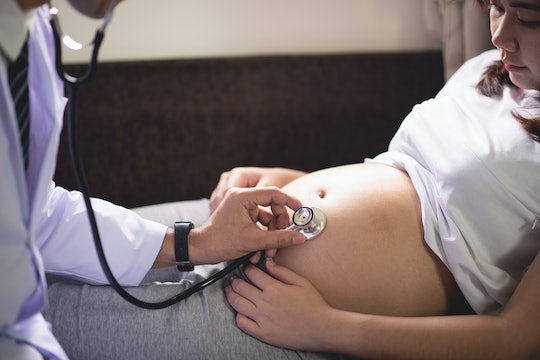 Here's How Pregnancy Affects Breast Cancer Risk, According To An Expert

October is Breast Cancer Awareness Month, so it's a pretty good time to do some self-checks at home — even if you're pregnant. If you do find something, first of all, don't panic... but you'll still want to know more about how pregnancy affects breast cancer and its risks.

While every situation is different, “When someone is diagnosed with breast cancer during pregnancy, there is obviously the added anxiety of having to consider not only the patient, but also a fetus," Dr. Janie Grumley, breast surgical oncologist and Director of the Margie Petersen Breast Center at Providence Saint John’s Center and Associate Professor of Surgery at John Wayne Cancer Institute in Santa Monica, California, tells Romper.

"Pregnancy is associated with hormone changes which may accelerate the growth of cancer for those with hormone-positive breast cancer. It is important patients seek care with a specialist as there are consideration and discussion that may be complex," she adds.

The most concerning thing about breast cancer is the spreading of the disease, but if detected early, it can certainly be treatable depending on the type of breast cancer. Unfortunately, pregnancy can make the detection process confusing.

“When a woman is pregnant, there are a multitude of changes that occur in the breast. New lumps and changes can often be dismissed as ‘normal changes.’ Most physicians are reluctant to order imaging for fear of radiation exposure to the fetus, however in most cases an ultrasound — which does not use x-rays — may be performed to assess new changes in the breast,” Dr. Grumley says.

“Keep in mind that most changes in the breast during pregnancy are not cancer. If there is any concern, discussing the changes with a breast specialist may help detect problems early, minimizing the risk of spread while reassuring those who do not have concerning findings.”

And while breast cancer doesn’t affect the fetus, according to Grumley, some treatments may affect your baby’s fetal development, “so selection and timing of treatment need to be considered,” she says. “Some chemotherapies are safe during the second trimester of pregnancy, however not all women need to have chemotherapy. Hormonal therapy is not recommended during pregnancy as this can have effects on pregnancy,” Dr. Grumley says.

“Chemotherapy is a large range of medications with different actions on different cells. Some can be safely given during pregnancy while others may have significant effects on the fetus and should not be given during pregnancy. In breast cancer, there are a number of chemotherapy agents that have been shown to be safe and may be used as treatment in the second trimester of pregnancy,” Grumley explains.

While it’s important to keep in mind that your breasts go through a lot of changes during pregnancy and you’ll probably find a lot of new lumps and bumps, it’s probably nothing to worry about. If you are worried, it never hurts to get it checked out, especially with an ultrasound, which has no effect on the fetus. And if it does turn out to be something, thankfully, there are ways to treat it in the second trimester of your pregnancy, including chemotherapy and surgery.