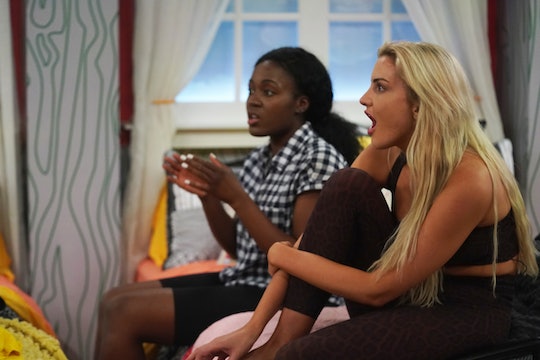 The Whacktivity Power On 'Big Brother' Could Shake Things Up

Another week, another big twist thrown in the trenches to make the Big Brother 21 houseguests battle it out. Twists are nothing new in the Big Brother universe and most fans and even players live for them. They can be the difference between being public enemy number one and suddenly being safe for several weeks in a row. And right now, fans are probably wondering how the Whacktivity power works on Big Brother since it can be a huge game-changer for pretty much anyone it effects, should it be put into motion.

As the houseguests learned on Sunday’s Big Brother episode, there will be three Whacktivity competitions in total and each will be played during their designated week. The three categories the houseguests had the option of signing up to compete in were chaos, panic, and nightmare. It's still unclear what the chaos and panic competitions will entail, but the nightmare Whacktivity competition was played on Sunday, resulting in a powerful gift that Ovi can use to shake things up this week.

When Ovi won the nightmare Whacktivity competition, he was secretly awarded the nightmare power. The power can be used once for any of the first six nomination ceremonies and gives Ovi the ability to secretly remove the nominees from the block after a nomination ceremony. This would then force the head of household of that week to put two new nominees up for eviction and get his or her hands dirty once more. Should Ovi use his nightmare power, he could completely ruin current HOH Christie’s game.

The only problem I see with Ovi winning the nightmare power is the possibility that he might not even get the chance to use it to his advantage. The houseguests still have to play the power of veto competition and if Ovi is put up in place of a nominee, he might not be able to use the power to save himself. There is a chance that there are some unspoken rules that go along with the power that would keep him safe, but let’s hope that Ovi won't be put on the block at all and that he will get to survive another week to keep that ridiculously powerful prize in his back pocket for when he really needs it.

The other Whacktivity powers could have similarly useful benefits for the houseguests who win them when the time comes. While I still can't figure out what a chaos Whacktivity competition might be, I wouldn't be surprised if there is a timed competition that is messy, loud, and hectic. The panic Whacktivity competition might be similar in being fast-paced and stressful for the competing houseguests. But the prizes for those competitions could be anything from being safe from eviction for a few weeks to being given all of the benefits but none of the difficulties of being the head of household.

Back in Season 7, a similar power was introduced, called the Coup d'Etat, which gave a secret houseguest the power to take off the head of household’s nominees and replace them with their own choices. The same power was given to a houseguest in Season 11. Last season, Tyler won the Cloud power app, which would have given him immunity at either a nomination ceremony or veto meeting, had he ever had to use it. Luckily for him, he didn't need to, but Big Brother 21 already has tons of alliances popping up and players who might need to use their powers sooner rather than later.

There’s a good chance that the other Whacktivity powers outside of Ovi’s nightmare power will be just as powerful and important in stirring the pot and ruining some players’ games. It's basically the stuff that Big Brother fans live for.