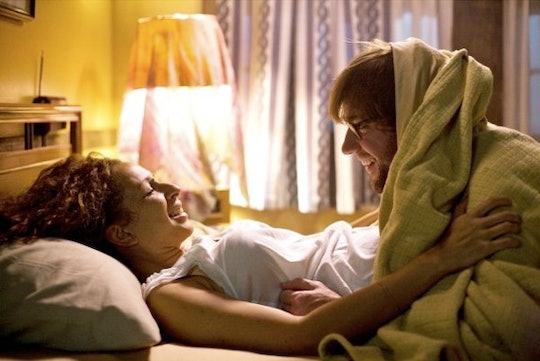 How Does Your Orgasm Feel Different When You're Pregnant?

Having sex while you're pregnant may not be the easiest thing to do with all the nausea, back pain, and you know, giant, cumbersome belly, but it's totally worth it. Even if you don't have a partner, bringing yourself to orgasm while pregnant may be one of the best things you can do for yourself, despite how different your orgasm feels when you're pregnant.

Yup. Having an orgasm while pregnant is 100 percent safe for you and your baby, but it can feel incredibly different than your pre-pregnancy climaxes.(Is nothing sacred anymore?) But don't worry. It doesn't feel different in a negative way. In fact, a Baby Center poll found that out of more than 2,800 moms, 64 percent said their orgasms felt more intense while they were pregnant. According to Parents, the reason for this is all of the extra blood flow to your genitals while pregnant can make those orgasms of yours feel more sensitive and intense.

Even if your orgasm doesn't improve with your preggo status, you may still feel a change. An orgasm during pregnancy can also be accompanied by cramps.

Totally normal, and nothing you need to freak out over, but it happens. According to The Bump, the reason for the light cramps is that your uterus is contracting during an orgasm. This has actually always occurred when you're climaxing, but now that your uterus is bigger, you notice it. It doesn't hurt the baby, it doesn't hurt you, and it fades away fairly quickly. Babble notes that they feel like light menstrual cramps, but the intensity of them varies from woman to woman.

However, in the later weeks of pregnancy, you may lose some of the sensitivity of your orgasm. Pregnancy coach Danielle Cavallucci told Fit Pregnancy that as your baby grows, your uterus can't fully contract during an orgasm. At that point, you may be stimulated to the point of climax, but unable to get there. Total bummer, but just think of it as your kid getting a jump start on interrupting your sexy time, OK?

Obviously if your cramps during an orgasm don't subside or they become more intense, it's always best to give your doctor a call. But while you're pregnant, enjoy those earth-shattering, more intense orgasms and the benefits that come with them.

More Like This
Everything You Need To Know About Missionary Sex During Pregnancy
How To Tell Your In-Laws You’re Pregnant
30 Marvelous Baby Boy Names That Start With “M”
I’m A Newly Single Mom. How Do I Get Over My Body Insecurity?