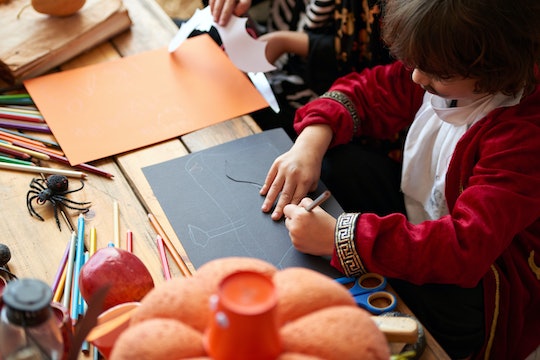 Here's How Early You Should Start Decorating For Halloween, Based On Your Zodiac

It's Halloween time, everyone! OK, it's still August and we're all sweating and clinging to our iced coffees. And, yes, Halloween is still weeks away. But I know I'm not the only one champing at the bit, eyeing my box of bat, spider, and skull decorations in the basement in giddy anticipation. How early should you start decorating for Halloween? As soon as possible, if you ask me, but that probably has a lot to do with my zodiac sign.

I feel like the pairing of astrology and Halloween is natural, because both are pretty ancient and spiritually inclined. Of course, while both Halloween and astrology can hold deep significance for some, generally speaking they tend to be considered good old fashioned, light-hearted fun. Also, some people (and, from my own personal experience, it seems like a lot of the same people) are really into both. And who can fault us? I feel like both astrology and Halloween are all about taking a break from the world as it appears and reveling for a little while in the idea that, actually, there's more to all of this. The stars rule our actions. Spirits are everywhere. We may appear like mild-mannered office workers and parents but, inside of us, deep down, we're vampires and witches and maybe the creepy clown from It (I don't judge).

My point is, both are a little bit of an escape from reality, and who doesn't need that from time to time? But how soon can we expect to see you preparing for the holiday? Let's take a look, sign by sign: