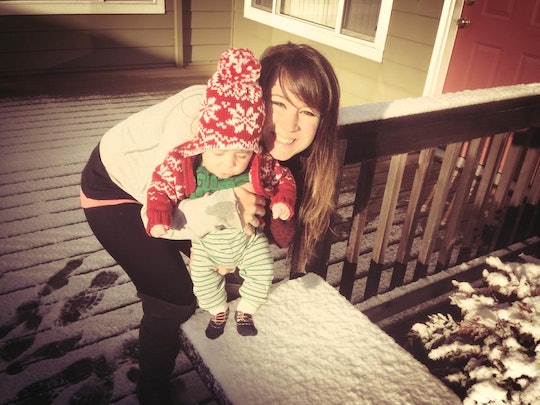 How Having A Child Changed How I Feel About The Holidays

When I was a child, and until very recently, I despised the holiday season. It wasn't until I had my own son that I learned to love the holiday season. Growing up, I idly watched as my friends and their healthy families celebrated gleefully, my eyes shut tightly, waiting for the storm to pass. It's difficult to value "family time" when your family is at the mercy of a physically abusive father. Time off school meant time at home, and time at home meant time spent being afraid or hearing things breaking or being called names or, inevitably, getting hurt.

During the holidays, presents weren't meaningful gifts. Instead, they were considered palpable measurements of our gratitude and affection. My father would make a list of all the things he expected to be gifted with each holiday season and then buy many of those items for himself because he just knew we wouldn't care enough to purchase them for him. He would bring them home, wrap them, and then put our names on the card as a final "f*ck you". It was a materialistic and purposeful slap in the face, the kind you can only get when you have a toxic parent. A successful, "I'm worth more than you're willing to show me, and I'm definitely worth more than any of you." I would feel ineffectual and angry, all at once. A part of me wanted to desperately prove him wrong, to the point that I'd break the bank and spend the paychecks I received cleaning hotel rooms or serving tables on items I had no business buying, all in a pathetic attempt to show him that I could do more and be more. Another part of me didn't want to get him anything at all because, in the end, what would it matter? If buying a bunch of materialist things was his quantifier for love, then he could love himself all he wanted.

During the holidays my mother would, without fail, be accused of cooking some pivotal dish at a substandard, and therefore unacceptable, level. Casseroles would be too cold or pies would be too tasteless. If she didn't cook something correctly, she didn't care, and she probably wasn't paying attention so that meant she was thinking of someone else, and that someone was a man, and she was probably cheating and on and on it would go, until he would hit her and she would cry. If she wasn't spending enough time in the kitchen, she was a horrible wife, and if she was always in the kitchen then it was just another example of how she was consistently in the way. If anything went wrong, she was to blame, and it didn't take long for us to realize that something was always going to go wrong.

During the holidays, instead of love and joy, there was discontent and anger. My father would accuse my mother of sleeping with someone or wanting to sleep with someone or not sleeping with him enough. And yes, this happened every. Single. Year. His baseless accusations — fueled by fear, anger, and deeply-rooted self-esteem issues — became a holiday tradition of sorts, aside from the Puerto Rican meal called Pernil and a large, extended family gathering that often involved arguing as well.

When I was younger I hated the holiday season and everything it embodied. I learned, from a young age, that it was nothing more than a time of materialistic overindulgence, fake sentiment, and stressful situations. It all seemed fabricated; a show that families adamantly put on to convince those around them that all was well on the home front.

Then I had a child. And the holidays changed.

My partner came from a loving home with a loving mother and father, and he adores the holiday season. He was more than excited to start new traditions with his new family and, while I wasn't above rolling my eyes in the process, I agreed to play along. We bought an Elf on the Shelf before our son was even born, laughing at all the ridiculous (and honestly, inappropriate) ways we could position the elf to convince our future child he was being spied on by Santa's little helper. We decorated our apartment after he was born to the point that it looked liked the North Pole gone awry. We bought presents for our child, knowing that he wouldn't have any recollection of them or consider them materialistic manifestations of our love. We simply did it because wrapping them was fun and watching his eyes light up at a new toy was genuinely satisfying.

And now that our son is getting older, the holidays are only becoming more and more enjoyable. On Thanksgiving, we watched the Thanksgiving Day Parade and then a myriad of NFL games while a Puerto Rican-style turkey roasted in the oven. My partner called out his recipes and gave a cooking play-by-play so, even at 1 year old, my son will start to learn about his Hispanic heritage and culture. Come Christmas, we'll watch holiday classics and newfound favorites and all wear matching pajamas, while a real (albeit small) tree and its adorning lights twinkle in the background.

It's important to me that my son experiences the holiday season with a clean slate. It's vital that I don't taint his memories by introducing the ghosts of my own. I may not have experienced Thanksgiving or Christmas or New Years the way I would have wanted when I was a child, but I have the opportunity to provide better experiences for my son. And in doing so, I get to re-live the holidays all over again, through is big, brown, beautiful wide eyes that glisten and smile and tell me that the small things are the things that matter.

It definitely took longer than most for me to enjoy the hoilday season, and sometimes it's still difficult for me to completely commit to the all the joy and spirit with extreme dedication. But the look on my son's face when the Christmas lights flicker, the excitement he expresses when he opens a box, and the snuggles we share on a cold winter day are all reminders that the holiday season can, and will be, what you make of it.

Thankfully my kid has made it something truly special.