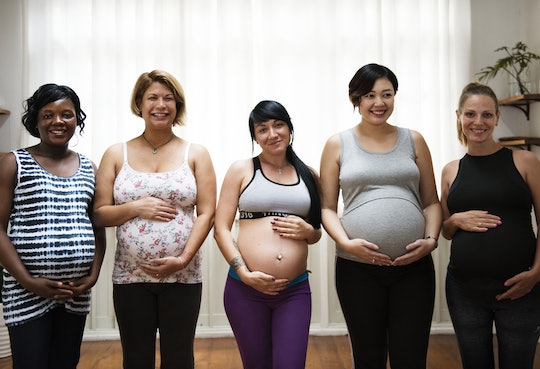 *Must* You Make Mom Friends? These Experts Think So, Actually

When I was expecting my eldest daughter, and even through the first year after her birth, I was adamant about not needing any new friends. My partner, in-laws, the parenting blogs I read, and my own mother all seemed to preach the importance of becoming friends with other moms, but I was resolved not to allow having a kid to "change my life." It seemed to me that if I actively worked toward making new pals, I'd be abandoning my old, child-free ones — and by abandoning them, I'd also be leaving behind the post-work drinks, the impromptu nights out, the freedom, the youthfulness.

Looking back on it now that I've welcomed a second daughter into the universe, I cannot believe my naiveté. I cannot fathom how I ever thought my life wouldn't change once I had a breast pump on my nightstand and a Diaper Genie in the former guest room. To have a child is an irrevocable shift of lifestyle. It is a transition of priorities, routines, and day-to-day goals. Where once I might have called a day a "success" if I cleared out the starred folder of my work inbox, for example, I now call a day a "success" if neither of my children poops through their outfit.

In the end, the first year of motherhood was a lonely one for me. I felt more and more out of touch with pop culture, my friendship groups, and my profession with every passing day. I was terrified of being the kind of parent who "always talks about their kid" or "posts too many photos of their baby on Facebook," in case that scared away or simply bored everyone I knew. I also felt like I had to play it cool — like I couldn't admit how overwhelmed and difficult every minute of every day actually was, especially in the first couple of months after labor when both my body and mind were in recovery.

It didn't take long before I began to reevaluate my thoughts on forming friendships with fellow mothers, and to wonder how important doing so actually might be.

"It's fundamental," Lucia Giovannini, a member of the American Psychological Association and doctor of psychology and counseling, tells Romper. "It's important to [form these friendships] possibly even before becoming a mother."

"Having a baby can be an experience that changes you," she adds. "Lots of childhood memories will come up, lots of childhood fears, lots of unresolved patterns with your own parents ... partly because you are a mother and you are being there in a closer relationship with the newborn. And partly because of all the hormonal changes that stimulate your amygdala and hippocampus, which are the two parts of the brain related to old memories and to anxiety and fear."

The only person I was confiding my feelings about motherhood to was my partner.

Much of my own anxieties and fears certainly spiraled after my first baby was born. I deconstructed my own childhood, I interrogated how my parents raised me, I picked apart what they could've done better, and tried to find what they might've done right. I struggled endlessly with the idea of being someone's mother at a time in my life when I still wasn't sure I felt like anything but a child myself.

If ever I tried to relay these feelings to my pre-existing friends, most would listen patiently. Most would offer a warm hug or the gentle reassurance that I'd figure it out; that it would all be OK. Still, I could not help but feel that there was something missing from the conversations.

"I remember my girlfriend calling me in a massive meltdown when she was a new mom, stating she hadn't had a bath in two and a half days and all she wanted to do was feel like a 'girl' again," says Susan Winter, best-selling author and relationship expert, in an interview with Romper. "I could empathize, but I couldn't offer her a known set of alternatives for time management or the type of solutions she needed."

"Associating with other moms is a vital lifeline to our sanity and our sense of humor," she adds. "Having good friends that are moms means you can get the best tips and guidance for tried and true, real-life solutions to the exact problems you're facing, and probably have a good laugh about the chaos and drama you've experienced (rather than a cry)."

Eventually, I came to this same conclusion. The only person I was confiding my feelings about motherhood to was my partner. Though, as a first-time parent himself, he was on the same page with a lot of the things I said, there were still others he couldn't understand fully as a father. So, I started making more of an effort to go to baby and toddler groups. I started pushing out of my comfort zone and approaching women with children. I made plans for play dates.

Most of the time, we wait for other people to reach us. Instead, you really need to to be the one reaching out.

As new moms, Giovannini agrees that we must be "open to asking for help, to reach out. Most of the time, we wait for other people to reach us. Instead, you really need to to be the one reaching out."

After just a couple of weeks of actively trying to meet people, I ended up meeting a couple of fellow mothers who would become some of my closest friends; they became the people I could text or call at any time when I just wanted to vent about sleep training or picky eater syndrome or postpartum loss of sex drive or vaginal stitches. They became people I could send pictures of my babies to without ever worrying I was doing it "too much." People who'd rejoice with me at every milestone or cry with me at every setback, because chances are they had experienced (or were living through) the same exact things.

None of this is to say that we should let go of friendships with child-free people, though. On the contrary, these relationships can be essential, too, simply in different ways. "When you're a mother, you risk being 100 percent focused on your child, so you end up talking all day about children, how many times did the child poo [and] you risk of losing yourself a little bit," Giovannini adds. "That's where your child-free friends will help ... cultivating friendship with the child-free friends forces you to talk about something else, to avoid 'losing yourself,' [and] focus on something that makes you feel like you, [like going] out of the house, with or without your baby, and not just to places where you will find other moms."

Winter agrees, noting that "each friend, whether child-free or a parent, brings their own unique version of support and happiness into our lives. And for that reason, a diverse group of friends are able to offer a wide breadth of love and support."

Even so, it's OK to need more. It's OK to need to find new people. Part of my initial reluctance to meet fellow mothers also stemmed from the fear that my preexisting loved ones would feel like I no longer cared about them. Like I was too absorbed in being a mom to pay attention to what was going on in their lives. Like so much of "mom guilt," however, this particular breed proved wholly unnecessary.

"Certain time periods require us to focus our attention on specific goals, whether you're founding a start-up or entering parenthood," says Winter. "It's only natural to want to be surrounded by those of similar interests, and whose skills compliment your current needs."

More Like This
Advice For Rihanna On Having A Baby In This Country, From One Black Mom To Another
Model Hunter McGrady On Being 6 Months Postpartum In Latest 'SI' Swimsuit Edition
These 4 Sleeping Positions Will Keep You Comfortable After A C-Section
Everything You Need To Know About Postpartum Blood Clots