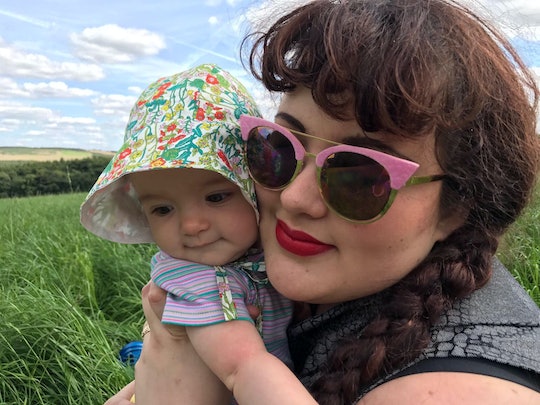 Can We All Agree That Moms Make Sh*tty Friends, & That's OK?

During a recent tidying session at home, I came across a dress I had promised to gift my friend. It was a vintage-inspired, outer space-print piece that I loved but never wore. My friend, on the other hand, would wear the hell out of it. I took out my phone to confirm her address so I could ship it out that day. I was certain it'd only been a couple of weeks — maybe a month — since we'd last spoken. I was wrong. It had actually been six months. I quickly started typing "I'm sorry I've been such a shitty friend," and in that moment, I realized just how bad mothers can be at being friends in general.

On this occasion, my friend was incredibly understanding. She admitted that she'd been worried, asking herself whether we'd fallen out for some reason. Even so, she said she knew the first year of motherhood must be tough. She said I didn't need to apologize. She said what I wished all my friends would say when I prove myself unreliable.

Since having my daughter 13 months ago, I've flaked on people more times than I can count. I've cancelled plans at the very last minute. Texts, emails, and Facebook messages have gone ignored for months at a time. I've promised to call, but never have. I've promised to be there, but have never been.

If I'm truly honest with myself, I've never really been a brilliant friend. Anxiety and a tendency to hibernate mean I'm usually too in-my-own-head to check my phone or even make it out the door. Motherhood has only made things worse.

There are times when all I want to do is apologize for this fact. I want to reach out to everyone I care for, send them the snuggliest hug, and commit to doing better. Most of the time, however, I just want empathy. I want people to understand that expecting me to be friend-of-the-year just isn't possible right now, but that this doesn't mean I don't give a sh*t. It doesn't mean I'm not sorry.

Thankfully, my closest friends usually get it. Even if they aren't parents themselves, they try to put themselves in my shoes. They imagine what it must be like to go a year with little to no sleep. They can conceptualize that nights out aren't doable unless my partner or a babysitter are available to be with my kid all evening long. They know I can't just "pick up and go," even if they don't realize just how frustrating that actually is.

Not everyone has understood, though. Some people are over it. They're fed up of feeling ignored. They're exhausted of trying. They don't want to put any more effort into a relationship that feels one-sided. They want to invest in people who call back, who make time, who offer shoulders to cry on, and who attend all their parties, birthdays, or dinners.

Obviously, I get it. I've tried to articulate how sorry I am to countless people over the course of the last year because I really do get it. I often wish I could be one of those parents who "does it all." The kind of mom who juggles work, childrearing, and other responsibilities of the home while making time for her buddies on the weekend. I'm just not, though. I've tried, and I've failed every time.

The truth is, I just don't have time. I can't remember the last time I read a book cover-to-cover. I haven't painted my toe nails in a year and a half. I don't have sex nearly as often as I'd like to.

I don't know for sure what's responsible for this failure. Maybe I just have poor multitasking skills. Maybe my history of anxiety and depression are to blame. Maybe I'm somewhat self-absorbed, even if I don't love to admit it.

I suspect all of this plays a part, but the truth is, I just don't have time. I can't remember the last time I read a book cover-to-cover. I haven't painted my toe nails in a year and a half. I haven't waxed my mustache hair in longer. I don't have sex nearly as often as I'd like to. I almost never take walks, even though I live in a beautiful rural location that practically demands to be walked on.

I begin to wonder whether early parenthood should be a time for selfishness. Maybe it's supposed to be a time when we need (and get) extra support without anyone expecting much in return.

When I think about the landscape of my life right now, I begin to wonder whether early parenthood should be a time for selfishness. Maybe it's supposed to be a time when we need (and get) extra support without anyone expecting much in return. Maybe it's supposed to be a time during which we live only for ourselves and our kids, because that's genuinely all we can manage. And perhaps the guilt about being a sh*tty friend is just a consequence of the "you can (and should) do it all" mentality that demands women be everything to everyone. Always, as if to prove our strength and value.

If I'm honest with myself, I do have a little free time on occasion. Sometimes my daughter is with a sitter. Sometimes she's asleep. In those moments, however, I usually have to work. I have to try to make a living, because I don't just support myself anymore. Hell, I can't even remember what that was like. I also have to try to cook food, because my daughter isn't the only one who needs it to survive. I have to try to keep the house in a somewhat livable state, because when it's not, I don't feel like I can think, let alone do.

On the rare occasion when all of this has been done, and I still have some time, well, I try to do something for myself; something relaxing. Maybe I'll put on some makeup and a sparkly outfit, just to attempt to feel like my old self again. Maybe I'll catch up on a long-abandoned show. Maybe I'll take 20 minutes to browse an online catalog. Maybe I'll wash my hair. Whatever I choose, it's always something I can do from the comfort of my own home.

Maybe there are friends who should be apologizing to me, too. Friends who never visited me after labor, but who wanted me to visit for their birthday.

The little free time I get is about the practical or the self-preserving, because both are essential components of my survival right now. I'm still sorry for the many times this has resulted in casualties. I'm sorry for all the times I haven't used those minutes to check up on a loved one, or respond to a Facebook message. I'm sorry to anyone who's been hurt as a result of my life being turned upside-down — which turned me inside-out along with it.

Then again, maybe there are friends who should be apologizing to me, too. Friends who expected that I remain wholly unchanged, despite going through something life-changing; friends who didn't understood why I couldn't, or didn't want to, go to their rager; friends who never visited me after labor, but who wanted me to visit for their birthday.

Personally, I wish I could guarantee that I'll do better moving forward. I wish I could be the greatest mother, friend, daughter, or wife on Earth. But maybe I can only do a good job at one of those right now. Maybe the rest will come in time. All I can do is wait and see.