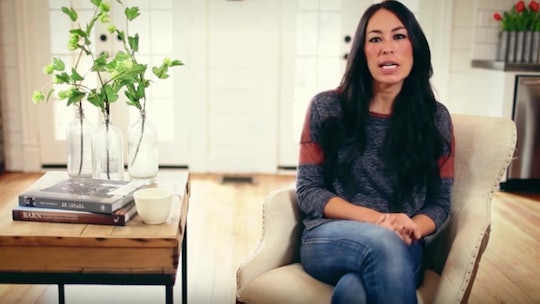 Here's How 'Behind The Design' Will Differ From 'Fixer Upper'

Our tears have barely dried following the end of HGTV's popular design show Fixer Upper, but faster than you can say open floor plan, Chip and Joanna Gaines’ spin-off, Behind the Design, is soon to premiere on the network. But how is Behind the Design different from Fixer Upper? The new HGTV home renovation show still features the DIY power couple, but this time around, it’s more about what goes into planning, decorating, and designing the homes that Joanna and Chip work to renovate for each of their clients. So instead of watching them tear down walls or convert a seemingly old and worn down ranch into your dream home, you’ll get to see everything that goes into making the houses into the bright and open creations that Chip and Joanna spent years creating with their former show.

So far there are 15 episodes planned to air and will immediate follow the corresponding Fixer Upper rerun episodes that go into the planning and execution of each design. Clearly, this has been a long time in the making, and just because Fixer Upper has officially ended its run of new episodes, it doesn't mean that the Gaines family is going anywhere anytime soon.

"I can’t wait to show our fans how every piece of the design comes together before the final reveal," Joanna said in a release obtained by People. "I want to nail every detail so that, when we walk away, Chip and I know we’ve given a family the one-of-a-kind home of their dreams."

In a clip released before the series finale of Fixer Upper aired, Joanna is shown in one of the many homes she and Chip renovated and for the first time, viewers get to see things in a not-so-perfect way, as far as interior design is concerned. There’s more than one room full of decorative odds and ends and Joanna explains her train of thought in adding more or less color and how she organizes each individual room as they complete the house. In the clip, one of the rooms has a literal stack of storage bins with some of Joanna’s materials and supplies, and on Behind the Design, viewers will get to see how she goes about emptying some of those bins once the technical renovations of each home are complete.

This isn't the first time they've let fans into their designing secrets, though. Even when there were still new episodes of Fixer Upper airing, there would be short TV spots or even YouTube uploads from HGTV that showed Joanna revealing designing tips and tricks. In one such clip on YouTube from June 2017, she’s in the kitchen of one of the homes that she and Chip renovated together. "A lot of the time, when I'm standing in the space and it’s all finished, it’s pretty, it's clean, I really have to step back and remember what this space was to begin with," she said in the clip. It would seem that Behind the Design is going to focus on that and then some.

Clearly, there’s a real demand for all that the Gaines’ personal brand offers. In 2017, they unveiled their partnership with Target in the form of Hearth & Hand, their home decor line. And now, fans of the show will be able to use some of the amazing products from the line along with Joanna’s tips and tricks from Behind the Design to bring a little bit of that Magnolia magic into their homes.

There will always be a spot in my heart for Fixer Upper and living vicariously through these couples who have the means to do six-figure home renovations, but Behind the Design definitely seems like the next best thing.