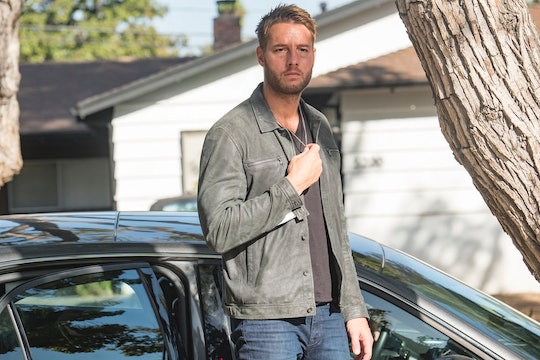 Even though it’s going to be unbearable once viewers learn about the true nature of Jack’s death on This Is Us, it’s a big question looming in the background during every episode. The clues we’ve been given have ranged from Kate insisting that it was her fault, to the more specific details, like Kevin somehow ending up in a cast around the same time as Jack's demise. But how is Kevin’s knee injury connected to Jack’s death on This Is Us? The timeline is key in figuring out the events leading up to and surrounding the grim fate of our beloved patriarch, and even though Kevin’s cast was shown in a quick shot during the Season 2 premiere "A Father’s Advice," it might be one of the biggest pieces of the puzzle.

Let’s think about what most fans know to be true as of right now. Jack was very likely dead when Rebecca pulled up to the burned down remains of the Pearson family home and broke down crying. In the same episode, Kate and Randall (and some random girlfriend of his?) were at Miguel’s house. Kate decided that she needed to be the one to tell Kevin about Jack’s death, and then there was a quick shot to Kevin making out with Sophie while wearing a cast on his leg. So since we know that Jack’s death occurs around the time as the cast, Kevin’s knee injury could signify that Jack’s death is near. But more than that, it could be part of why Jack died, if he did indeed die from the house fire.

Creator Dan Fogelman spoke to Entertainment Weekly at the beginning of the season and gave a few non-hints about what’s to come as Season 2 progresses. And while he didn’t give too much away, he did confirm that all of the little pieces will come together to explain the bigger picture of Jack’s death, including Kevin’s cast — which I'm guessing happens while playing high school football.

"You’ve seen a lot of pieces — this was always the plan for the Big Three. We had talked about the fire and what happened from day one of starting. This has always been the plan. You’re seeing a lot of things that are going to reveal themselves over the course of the season," Fogelman said. "The writers have sat and analyzed every bit of minutiae. A lot of the little things are going to come into play over the course of this season. All the answers about how Jack died, it’s all going to happen this season."

Of course this has led to numerous fan theories about how Kevin's cast and Jack's death could tie together. On Reddit, QuesoChef wrote the theory that would explain how both Kate and Kevin feel responsible for their father's death. The theory predicts that Kate covered for Kevin, telling their parents that he was home when he in fact snuck out. This led Jack to run into the burning house to save him, since he has a cast on his leg, but when Jack couldn’t find him, he succumbed to injuries from the fire later on. This could also explain why Kate, Randall, and Kevin don’t immediately look like they came from a burning house in the flashback. It's a heartbreaking possibility, but it does kinda make sense.

Mandy Moore recently spoke to E! News about the upcoming three episodes of This Is Us, which will center around one of the Big Three characters each week. But, according to Moore, that means that things are about to get that much more serious for Kevin, Kate, and Randall.

"The next three episodes are sort of a trilogy of sorts and they go to some deeply darkly places," Moore revealed. "I think that people are going to have a lot of opinions about [them], but I suggest that people be patient and stick with it ‘cause we need to go there in order to — there will be bigger payoffs later, down the road in this season."

As far as the dark places where things could go for Kevin’s storyline, judging by the promo for his episode, the focus will be on his high school knee injury, which will very likely coincide with his leg cast. And, at the very least, we know that the cast is a strong indicator of the time of Jack's death.