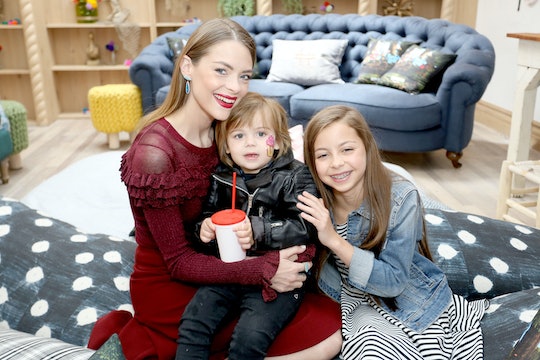 It all started with a simple, albeit stunning, photo. One night, Jamie King's doula snapped a photo of the actresses breastfeeding her then 8-month-old son James in bed. There was nothing special about the moment, as King had been breastfeeding her son since he was born. But she decided to share the photo on Instagram and, as a result, got people talking about breastfeeding in public.

"My photograph of breastfeeding actually wasn’t intentionally trying to advocate breastfeeding," King tells me in an interview to promote Pull-Ups' newest potty training program. "Then I realized it was an opportunity to say, 'Hey this is what I believe in.'" She posted the photo about two years ago at a time when, much like now, there wasn't widespread comfort with seeing a woman openly breastfeeding, on social media or elsewhere. Women around the country were being shamed for breastfeeding in public and being removed from establishments for doing so, and King decided to take a stand.

But the photo did more than advocate for breastfeeding moms. For those who took the time to really look at it and read King's caption, the image also addressed a much larger issue in the parenting community: the phenomenon of parents openly criticizing other parents' (completely safe) parenting decision, often online. Captioning the photo, "breastfeeding should not be taboo — and bottle feeding should not be judged — it's ALL fun for the whole family:)," King essentially told her followers (and the entire world) that the differences in parenting styles don't matter, as long as your child is happy and healthy.

And, as King has quickly learned, breastfeeding isn't the only area of motherhood where other people think they know best. When it came time to start potty training James, the actress found herself overwhelmed with methods, resources, and, of course, opinions. One tool King says she found helpful was a quiz Pull-Ups had just developed to help parents determine their child's "potty personality." After parents answer a few questions, the quiz provides tips specific to their child's learning style and needs.

"It was the first thing that really felt right to me," King says. "It felt like 'OK, this a partnership between myself and my child, and this is going to be fun.' It’s an experience we both get to enjoy together. It’s not an arduous thing. It’s really fun and really simple."

As a mother to James and his baby brother Leo, King knows she will have more milestones to tackle and, likely, more criticism to endure. She hopes, however, that creating a very public discussion around these topics will allow other moms to discuss them in a way that's mutually supportive and not judgmental.

"We just need to start letting go of the bullying and abuse towards each other," King says. This is especially important to the former Hart of Dixie star, not only as a mother but as a feminist. In the battle of equality for all, people tend to point the finger of blame at white, upperclass men. But King believes that women also hold each other back.

"I think women are the greatest perpetrators of hatred towards each other, and that really saddens me," she says. "So I use my voice as much as I can to make sure women know that I’m here to support them."

King has commented publicly on issues besides breastfeeding. The new mother of two has been very open about the struggles she and her husband Kyle Newman faced when trying to conceive. In a 2015 interview with People, King said that, after several attempts to get pregnant, she was diagnosed with polycystic ovarian syndrome and endometriosis — two conditions that affect women's reproductive health. Because of this, King endured five miscarriages, five rounds of in vitro fertilization, and 26 rounds of intrauterine insemination.

King could have kept this struggle hidden in her figurative closet, but ultimately she saw value in speaking out about the experience. "I was hiding what I was going through for so long," King told People. "If I’m open about it, hopefully it won’t be so taboo to talk about it."

But according to King, creating a civil conversation around taboo topics is only one step in the process of helping parents be less critical of each other. For mothers, a big piece of the struggle is learning to stop attacking themselves and start letting go of the guilt that often comes when you're a parent who wears many other hats. King says that guilt is a major source of stress for her as well.

"For me, guilt is a form of not loving yourself," she says. "When you start to judge yourself for the process you’re going through, you get these frustrated feelings." To keep the self-attacks form manifesting, King tries to find five minutes a day to do something that's just for her. This act not only keeps her centered, but helps her maintain her identity outside of motherhood, she says.

"If you don’t find a way to identify as being something other than a mother — and you’re all of a sudden only identified as a mom — that gets you down," she says. "You have to really go inside of yourself and say, 'What can I do for five minutes a day that gets me back to a place where I feel centered again?' Is it meditation? Is it reading your favorites book? Is it going in the car and screaming your head off? Make sure you are doing what you can to keep yourself centered."

The ultimate solution, she says, is accepting that fact that perfection is an unattainable goal. "Nobody is going to be perfect because this world is not meant to be perfect," King says. "All [perfectionism] does is work against you and create greater fear, and worry, and anxiety."

Granted, this is easier said than done. We live in the era of Pinterest and Instagram, where the pressure to make every decoration a DIY marvel, every meal look like it was prepared by a food stylist, and every moment picture perfect is deeply felt by many women. There's a tendency to put pressure on yourself and others to be flawless. But as long as your child is smiling at the end of the day, does it really matter if you made their dinner from scratch or picked up takeout? "We’re so much bigger than the labels we place upon ourselves," King says, a message she's constantly reinforcing to herself. "Find a way to get yourself back. Do those little things that remind you of who you are when you feel like you’re drowning in an idea of what you should be."