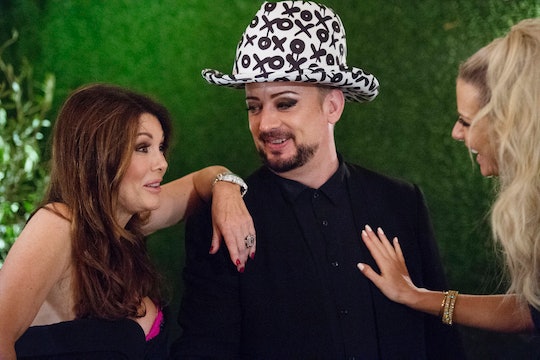 Boy George Is A Permanent Fixture In Dorit's Life

One of the most interesting things about The Real Housewives of Beverly Hills newcomer Dorit Kemsley, other than her house full of staff and adorable kids, is the fact that she and her husband Paul (PK) have a permanent houseguest in the form of Boy George. But since the setup is kind of unorthodox, you're totally allowed to ask: how long has Boy George lived with Dorit Kemsley? The Real Housewives of Beverly Hills star welcomed the iconic singer into her home years ago because of his involvement with her husband and he's been there intermittently ever since.

According to an interview with The Daily Dish on Bravo, Dorit said that a few years back, when Boy George first arrived in L.A., PK suggested that he come stay with them since he was managing the singer, and gradually, he became a permanent fixture in their home. "There was like an instant love between George, PK, and I," Dorit said. "We met George a few years back when he had approached PK about managing him. And when he came to L.A., PK had suggested, 'cause we had the room, he said, 'You're welcome to come to the house.'" So he did, and he built up a relationship with not only Dorit and PK, but also their two young children. In fact, he's even the godfather of their daughter Phoenix, so he's definitely there to stay.

Although Boy George has lived with Dorit and PK for a few years now, The Real Housewives of Beverly Hills is new to all of them and as recent as 2015, Boy George was telling the Daily Mail about an upcoming reality show featuring the three of them. Of course it wasn't, as he said, to the same tune as what the Kardashians have going on, but being on RHOBH has given them the opportunity to show their unique living situation and relationship to the world. "The banter is relentless," Boy George told the site about his relationship with the couple. "It will be very exciting and I am loving being the queen of the stage again."

Since coming into the world of RHOBH Season 7, Boy George has been a hit with the rest of the women on the show too, who have shared their own love of his former band Culture Club. If Dorit wasn't enough to win some of them over, she comes with an '80s icon in tow, so at the very least, she has that to bring to the table.

Boy George has lived with Dorit and PK for a few years now and although he's still performing and it was announced that he'll be joining The Voice Australia, he's obviously an honorary member of the Kemsley family and household.