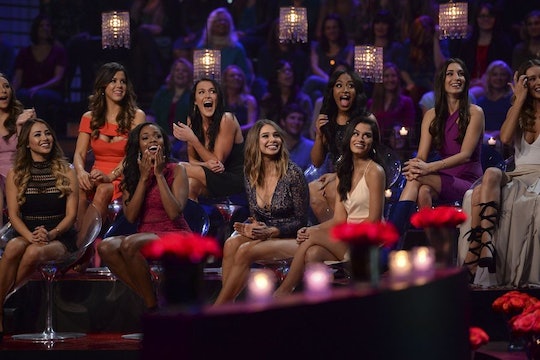 'The Bachelor's Women Tell All' Is A Must-See

Having shorter episodes of The Bachelor at a time when literally every date and every scene is so critical isn’t fun, but for now it’s all for the good of the show and the drama. And the drama is sure to be in full force thanks to Monday night's Women Tell All special, which will cut into the regular two-hour span that is usually allotted for any given episode of The Bachelor, but the sacrifice is for a worthy cause. That being said, how long is Nick's The Bachelor Women Tell All special?

The event will air on March 6, kicking off at 9:01 p.m. ET and lasting until 11 p.m. ET, giving you two glorious hours of Nick being faced with all of the women he eliminated, some of whom likely still have a few choice words for him. Throughout the season, Nick seemed to try his best to be subjective and remain a gentleman for the most part, but in a show where you literally have to dump women every single week, it’s hard to please everyone. And in some cases, he definitely broke a few hearts as the Bachelor. Somehow there are going to be two hours’ worth of interviews and confrontations to give both the contestants and Nick closure on the Women Tell All, but that’s definitely the beauty of it.

Except for a few contestants earlier in the season, a lot of the women Nick sent home took the rejection pretty hard and rightfully so. Even though Nick often shed a few tears along with them, like he did with Kristina, it probably wasn’t enough for them to forgive him right away or understand completely what went wrong. And what a lot of fans tend to forget is that even with Bachelor episodes that last two hours, there is a lot of editing involved and a lot of things we don’t get to see, so we can probably expect some of that bad blood to come to light as well. I mean, they’re supposed to talk about everything at these things, right? Two hours almost isn’t enough to cover it all.

Then there is the animosity between some of the women, like the famous Corinne and Taylor fight that lasted two episodes and included lots of name calling and condescending words between the two contestants. Let's hope that they are both able to finally squash their feud on the Women Tell All and make peace with the past.

The Women Tell All will be two hours long, meaning a shorter Bachelor episode once again (bring our grand total to three hours of Bachelor-centric content though!), so get ready for a pretty exciting night of television.