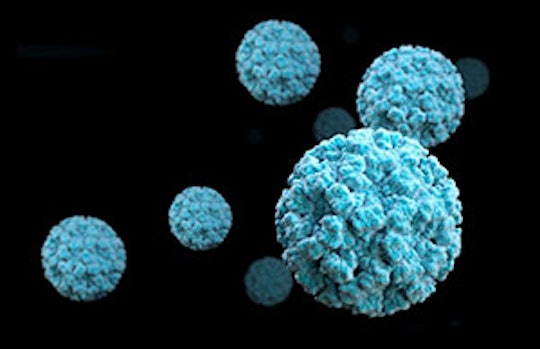 Image Courtesy of the CDC

Can Your Kid Go Back To Daycare After Norovirus?

This winter season has seen a nasty case of norovirus running amok across the country. Some schools have even closed their doors because of reported outbreaks of the winter vomiting bug. Since norovirus is highly contagious, there's a chance your young child has caught the illness. If that's the case, how long should you wait after your kid has norovirus to take them back to daycare? Parents should wait at least two days after symptoms have disappeared.

Public health officials recommend parents wait 48 hours, at minimum, after your child has recovered from norovirus — also known as the "stomach flu —before you return them to daycare. That means your kid has not experienced nausea, stomach pain, vomiting, diarrhea or any other symptoms associated with the illness for at least two days.

For some parents, it may not be possible to wait 48 hours, but it's important that you do — according to the Centers for Disease Control and Prevention, a child can still spread norovirus even within the first few days of recovery. That's why it's also necessary to remain diligent about hygiene once your kid's back in class. You and the daycare instructor should make sure your child washes their hands thoroughly before eating and after using the bathroom. Cleanliness has been known to cut down on the number of norovirus infections.

Norovirus is an infectious, hard-to-kill disease that spreads easily and quickly in closed and crowded spaces such as daycare centers, schools, nursing homes, and cruise ships, according to the CDC. People can become sick with the stomach virus after they've come into contact with contaminated food and surfaces. It is considered by the CDC to be the leading cause of food-borne illnesses and outbreaks in the United States.

Diarrhea, stomach aches, vomiting, and other norovirus symptoms can first appear in as little as 12 hours after exposure and can last as long as three days. Most people recover from the virus without treatment; however, the Mayo Clinic notes that children, older adults, and people with underlying illnesses may require extra medical attention since vomiting and diarrhea can cause severe dehydration. If your little one is infected with norovirus, take them out of daycare right away and put them immediately on bed rest. Make sure they drink lots of liquid and eat foods that replace the nutrients they will lose (think bananas for calcium and potassium). And don't forget to disinfect everything in the house before and after recovery. You wouldn't want your kid sick again.