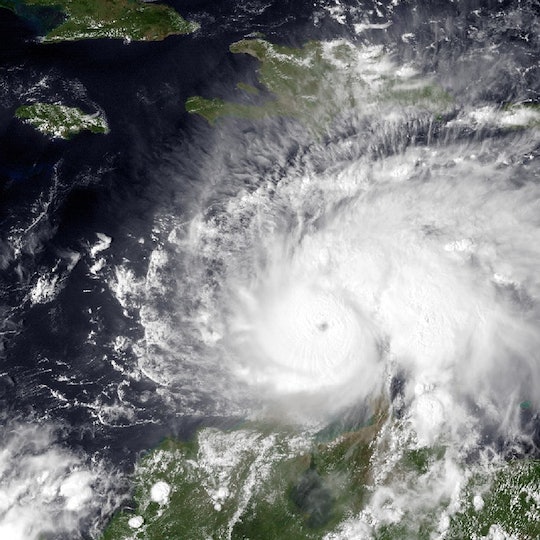 This Is How Long Hurricane Irma Might Be Around

After hitting the Caribbean islands of Barbuda and St. Martin on Wednesday, Hurricane Irma is rapidly approaching the coastal cities in the United States and is expected to reach Florida in a matter of days. This powerful storm has raised a lot of questions, one of which is how long Hurricane Irma will last. While hurricanes do have a predictable trajectory, they can be over in as quick as one day or span as long as a month.

According to HurricaneScience.org, hurricanes tend to follow a similar development, known as the hurricane life cycle. Every hurricane begins as an area of low pressure in the atmosphere with converging surface winds circulating. This is what meteorologists refer to as a tropical disturbance. If the proper environmental conditions are present, this disturbance can then increase in speed.

Once the circulation has a clear center of circulation, it is referred to as a tropical depression. From there, winds speeds determine future identification. In order to be classified as a hurricane, wind speeds must reach 74 mph. It is then placed in a category between one and five.

Irma has been declared a Category Five hurricane by the National Hurricane Center. Hurricanes of this strength are rare, which is why Irma has people so concerned. The National Weather Service has stated that Irma will most likely hit Florida, but specifics are still unknown. The NHC explained:

The chance of direct impacts from Irma beginning later this week and this weekend from wind, storm surge, and rainfall continues to increase in the Florida Keys and portions of the Florida Peninsula. However, it is too soon to specify the timing and magnitude of these impacts.

States of emergency have already been declared in Florida, Georgia, and South Carolina as the United States braces for impact by Irma. Florida Gov. Rick Scott has advised people to err on the side of caution when it comes to planning. According to ABC News, he said:

Hurricane Irma is a major and life-threatening storm and Florida must be prepared.

A timeline would certainly help families plan for the coming days and weeks, but, unfortunately, until Irma makes landfall, it is hard to tell just how long the storm will continue. It is worth noting, however, that just because the active storm surge has ceased, that doesn't mean that the situation is over. Shown by the recent damage to Texas by Hurricane Harvey, the period immediately following the storm can prove to be the most challenging. Lingering rainfall and flooding, as well as damage done by the storm's impact, can extend the experience of a hurricane well beyond its life cycle.

As Irma continues on its path, it's best to stay informed with local news announcements and prepare for what could be an potentially catastrophic storm.